The show's decor masterminds share how the characters' homes have evolved.

In our ongoing series Screening Room, we go behind the scenes with the -talented production designers and set decorators of today’s most visually alluring TV shows and movies for a deep dive on how they whipped up such indelible backdrops. 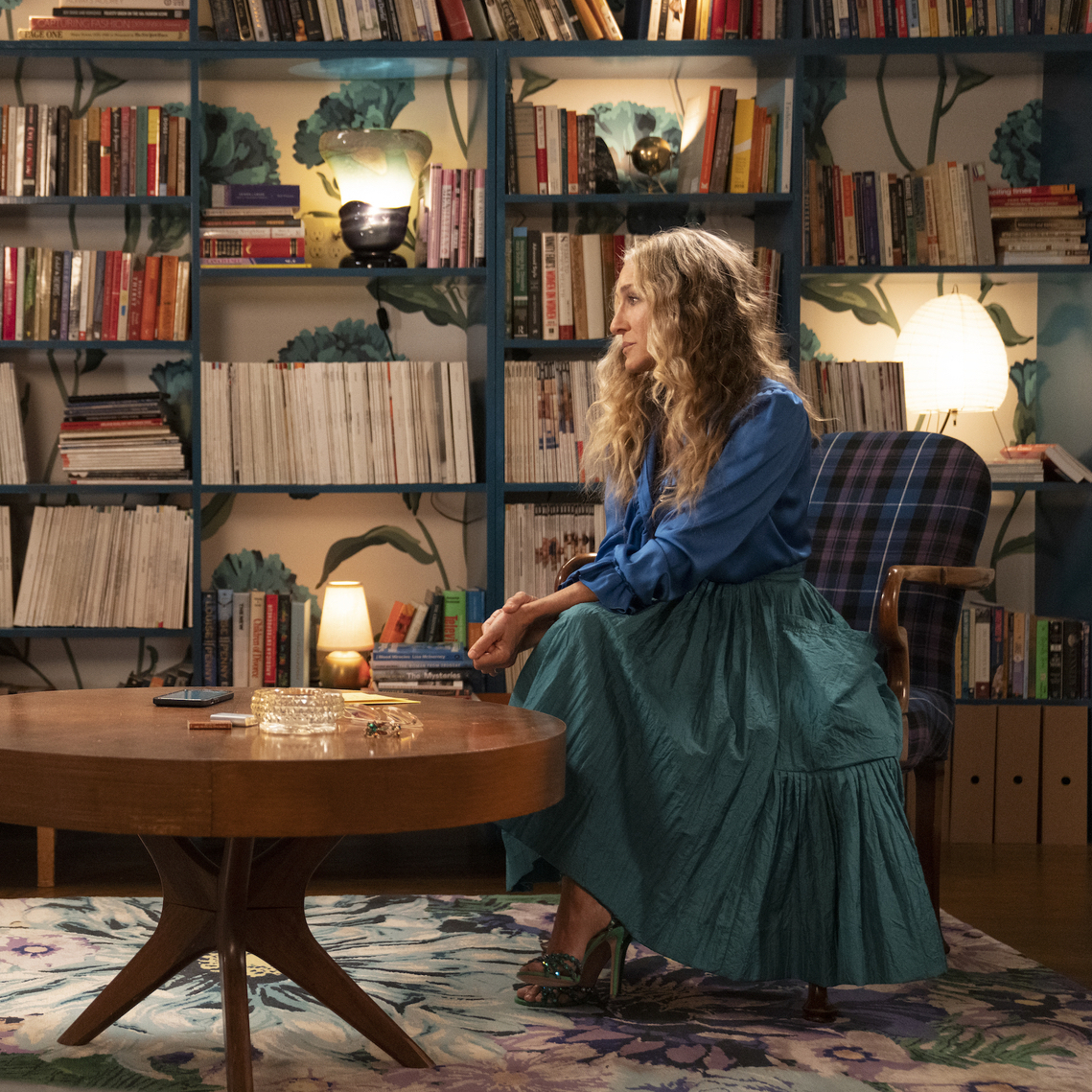 It’s been over a decade—12 years to be exact)—since we last had a front-row seat to the trials and tribulations of the ladies of Sex and The City. The new HBO Max series And Just Like That… reunites Carrie (Sarah Jessica Parker), Charlotte (Kristin Davis), and Miranda (Cynthia Nixon) as they navigate love, family, and age as 50-somethings in Manhattan. (Samantha is absent and living in London). The reboot finds Carrie hosting a podcast, Charlotte involved with her children’s school, and Miranda leaving her law firm to pursue a master’s degree. And, rest assured, the signature Manolos, “Carrie” necklace and tutus are back along with the swoon-worthy, magazine-ready interiors. Reflecting her travels and past life, Carrie’s apartment is filled with Paris artwork and various mementos that she would not necessarily use in her home with Big.Photograph by Craig Blankenhorn/HBO Max

For production designer Miguel López-Castillo, the design edict from longtime writer and showrunner Michael Patrick King summed it up perfectly. “He must have said eight times, ‘The bar is high, the bar is high, the bar is high… Whatever you do, bring the artistry, as I have never seen sets [from the original seris] that I was disappointed in,’” says López-Castillo, who worked as art director on 2010’s Sex and the City 2. Set decorator Carol Silverman concurs, noting, “[King] told me the taste level has to be exquisite and perfect.”

As the world’s most recognizable set, the streets of Manhattan vie for screen time with the show’s actual interiors. “It’s aspirational, and there have been a lot of changes. It’s about presenting not just the characters but New York City in its best light,” explains the López-Castillo. He was in charge of creating 25 interior sets at Brooklyn’s Steiner Studios; scenes were also shot at more than 75 locations from Tribeca to the Upper East Side. The series, like its predecessor, is a true love letter to Manhattan. Charlotte and Harry’s bedroom represents her tailored design sense and a palette makeover from her previous apartment.Photograph by Craig Blankenhorn/HBO Max

Each residence is as unique and distinctive as the characters themselves. While many of the locations remained the same, the interiors received an update. Carrie and her husband “Big,” a.k.a. John Preston, reside in the same co-op at Fifth Avenue and 82nd Street, complete with that to-die-for closet and oversized bathroom made possible with the purchase of a neighboring one-bedroom studio and constructed by the couple during Covid. The designers outfitted the primary bedroom with soft, organic pieces in neutral shades, adding luxurious green Fortuny curtains with Carrie in mind. “When we started designing the bedroom, I thought about how Carrie and Big were married and would always say they were more in love than they have ever been. I thought about it being this beautiful perfect paradise,” she says, which she represented visually Garden of Eden–motif wallpaper. However, she adds, “there is a snake in the pattern, which is a kind of metaphor for what happens… They’re like Adam and Eve, and the snake messes it all up.” Charlotte’s characteristically tailored, well-organized apartment that she shares with her husband Harry and two daughters reflects her own changing lifestyle. “We walked away from the white-on-white palette that defined her [in the previous series] as it felt a little passé. It’s all about embracing family life,” says López-Castillo, who often looked to Instagram to check out current design trends.

The TV room, outfitted in Schumacher’s tree-printed Timber! wallpaper, has also undergone a transformation, explains López-Castillo: “It used to be all pristine and white, and now it’s a messy area where gaming happens and the dog hangs out. Everyone has nested.” In contrast, the new family room, where daughter Lily plays piano, resembles an elegant salon. 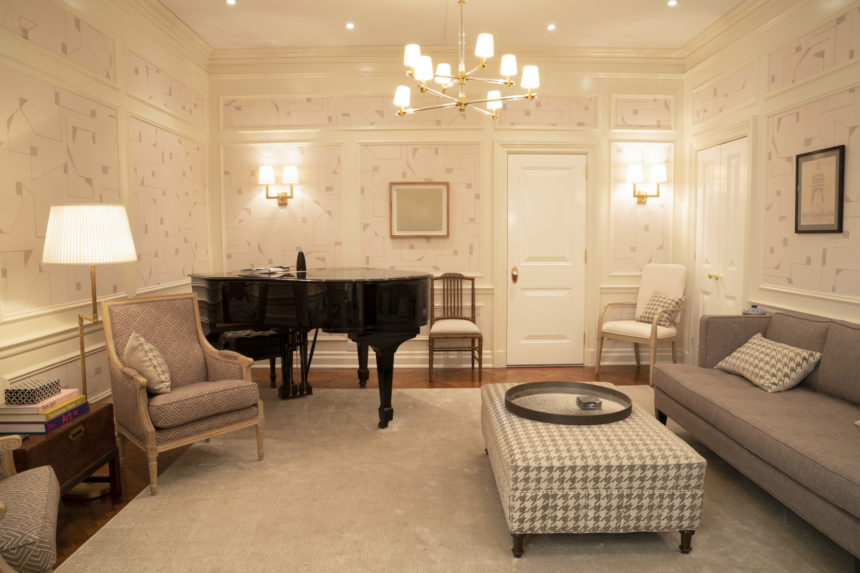 Charlotte’s design aesthetic is on full view (as is Circuit in Stone by Porter Teleo for Schumacher) with the addition of an elegant white-on-white paneled salon where her daughter Lily practices piano.Craig Blankenhorn/HBO Max

For the teenaged daughters’ room, the designers chose modern furniture from a partnership with West Elm. Schumacher’s lyrical Toile de Femmes wallpaper, illustrated with women socializing, horseback riding and playing musical instruments, symbolizes the series’ unique female friendships. Silverman had originally filled the girls’ homework nook with a jumble of erasers, papers and stickers—but ended up redoing it after Kristin Davis reminded her that the perpetually neat Charlotte would make sure it was tidy. 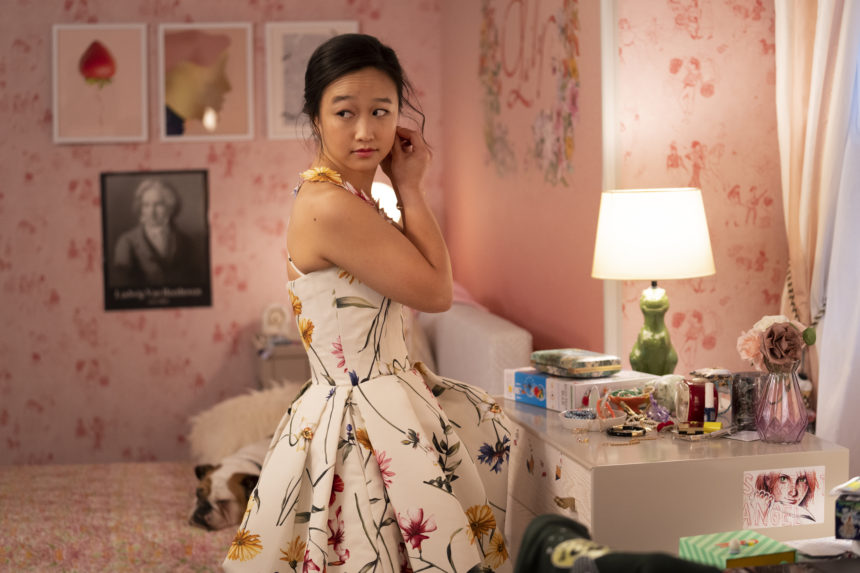 A sleek custom bathroom represents a high level of sophistication for the Upper East Side couple.Craig Blankenhorn/HBO Max

Miranda’s Brooklyn townhouse, where she lives with husband Steve and son Brady, received an expansion beyond the parlor and half-kitchen seen in the original series, but stayed true to the palette of cozy earth tones. “She and Steve are more interested in comfort than aspiration, and the home had to have a note of their static lifestyle,” says López-Castillo, who outfitted the townhouse with one of his favorite finds: a Danish mid-century modern wall unit from Furnish Green in Manhattan. “Miranda’s lifestyle at home was downright casual and a bit unkept. I presented a bit more flair and brownstone charm in our concept boards including some wallpaper, but Michael Patrick King didn’t want her space to compete stylistically with Charlottes’,” notes production designer Miguel López-Castillo.

Sex and the City devotees will be thrilled to see that Carrie has kept her iconic apartment, using it as a place to write and return to her roots. “Carrie’s love of fashion, strong patterns, and bold colors are on full display,” sasy López-Castillo. “It’s a place where she can afford to be as creative as she with her clothing.There are things in the apartment that meaningful but wouldn’t fit very well into her lifestyle and space with Big,” like the oversized floral wallpaper in her living room.

The team worked closely with Sarah Jessica Parker, who had clear ideas of how the space would look as Carrie entered her 50s. “Sarah Jessica likes to be very involved and is really into design, interiors, furniture, and particularly lamps; it was interesting how many of the things she had kept [from the previous series], along with most of the furniture from the original apartment,” says Silverman. “It was near and dear to her heart as to what the apartment should look like.” While Carrie and Big’s home is sleek and sophisticated, her old apartment is more colorful and eclectic.Photograph by Craig Blankenhorn/HBO Max The apartment is part work sanctum and part storage for her incredible couture collection.Photograph by Craig Blankenhorn/HBO Max