This Cemetery Is a Design Lover’s Dream 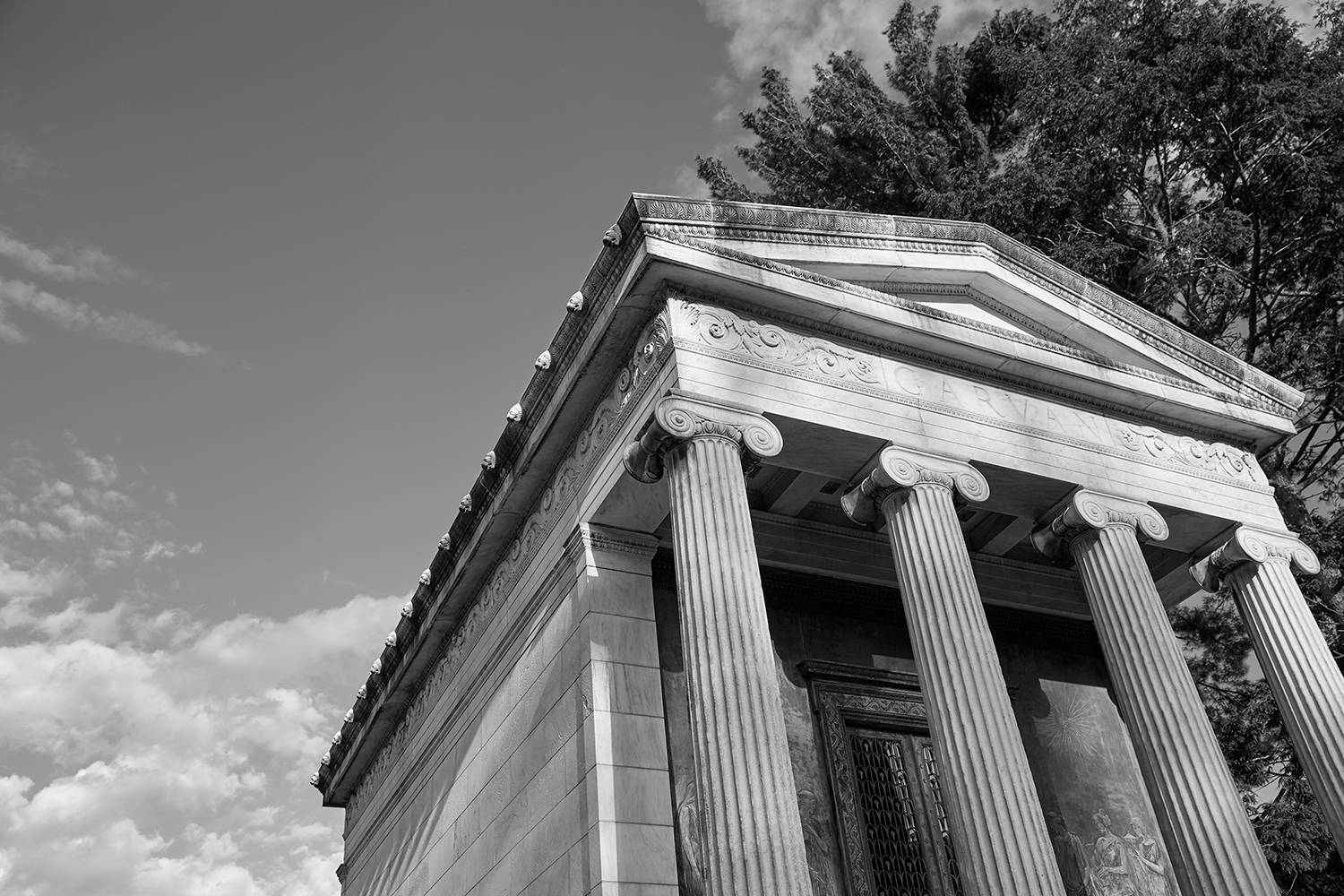 Up in the Bronx is perhaps the most jawdropping, exquisite concentration of late 19th- and early 20th-century structures anywhere in the world. They also happen to be mausoleums. Here’s why you need to make haste to New York City’s incredible, underappreciated Woodlawn Cemetery. 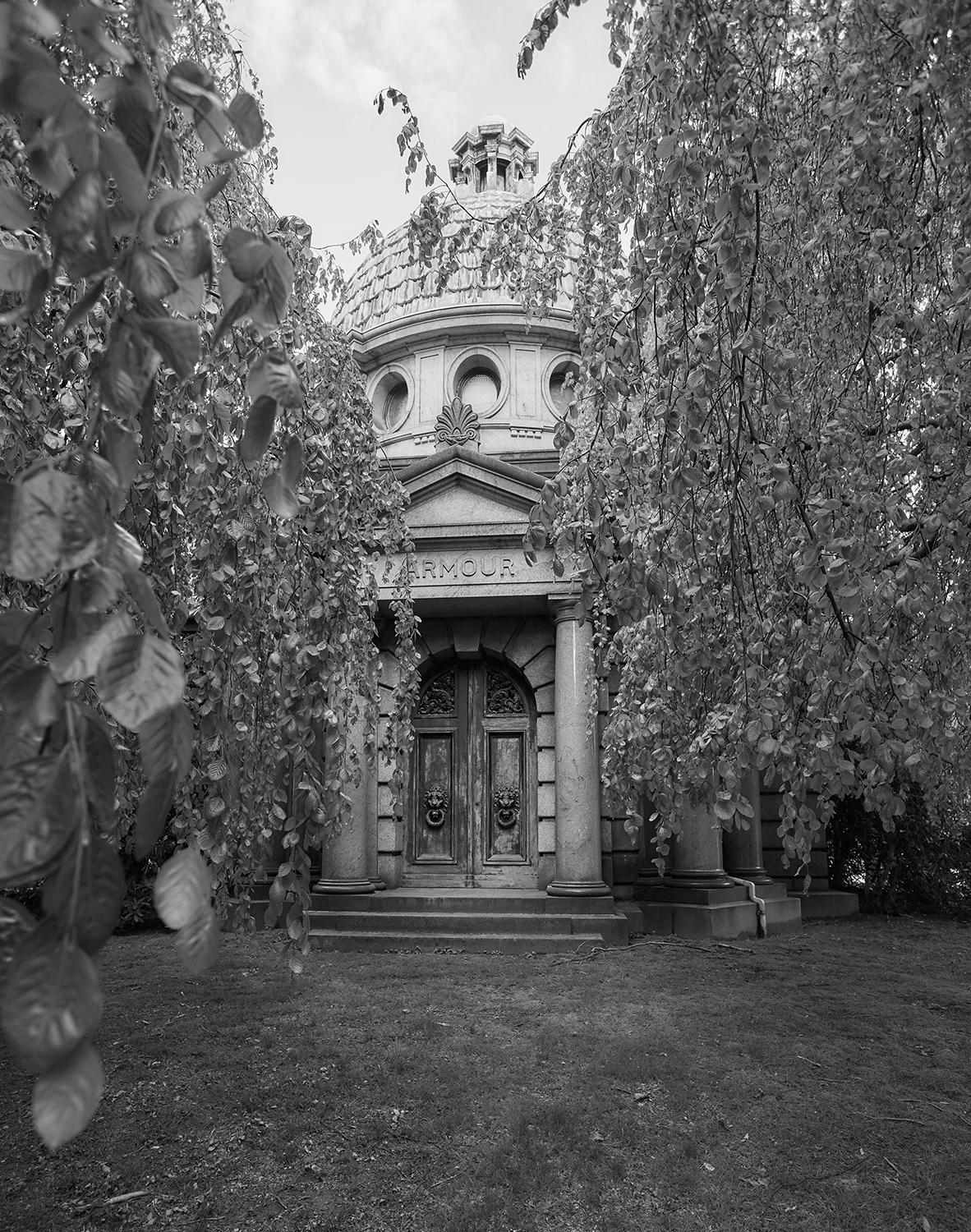 In New York City, timing—and real estate—are everything. When Woodlawn Cemetery was established in the Bronx in 1863, its 400 acres still felt Arcadian, far from Manhattan’s grind. But the city was encroaching, as development marched ever northward and the country experienced a staggering economic boom.

The many freshly minted millionaires of the robber-baron era scrambled to outdo one another with luxe mansions and opulent estates, hiring the best architects and craftspeople and spending extravagant sums. In a time that brought us the phrase “keeping up with the Joneses,” outward appearance meant everything. It was not the Gilded Agers’ style to do things halfway—and planning for their burial sites was no exception. 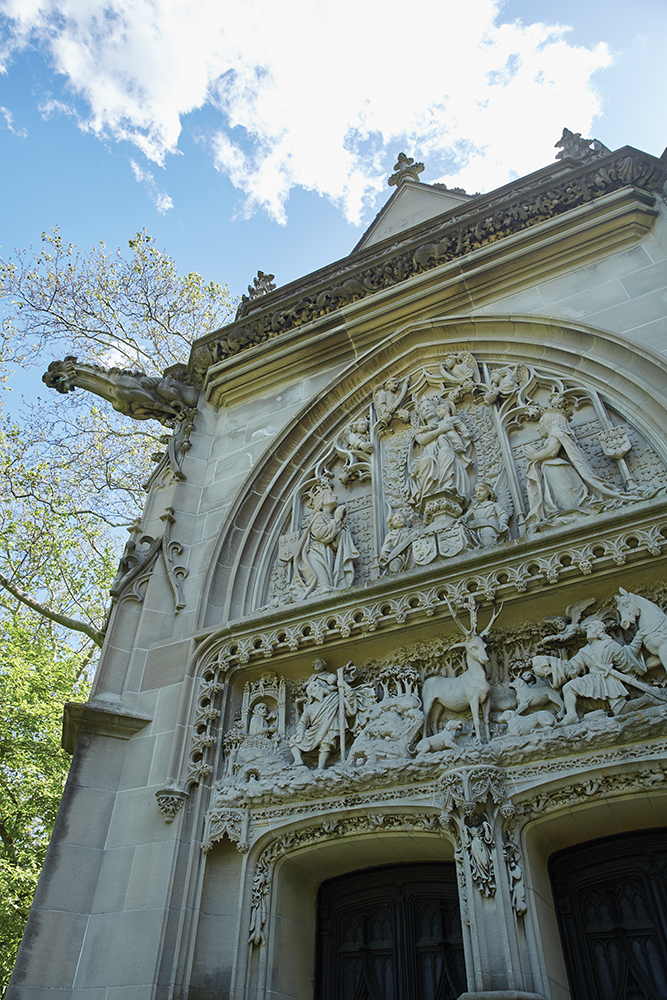 The Belmont mausoleum was designed in 1908 for Oliver Belmont, banker and U.S. congressman, and his wife, Alva Erskine, by Hunt & Hunt. The Gothic Revival structure, complete with gargoyles and tracery details, is modeled on the Chapel of Saint-Hubert in Amboise, France, which was designed by Leonardo da Vinci and is also where he is buried. Francesco Lagnese

Woodlawn was perfectly suited to be the location of choice for this grand display, and today the still-active cemetery is a National Historic Landmark that boasts the finest collection of funerary art in the country. It evolved from empty farmland and forest into a masterful synthesis of architecture, landscape design, sculpture and decorative arts, with a collection of extraordinary mausoleums—more than 1,300 of them—as its crown jewel. 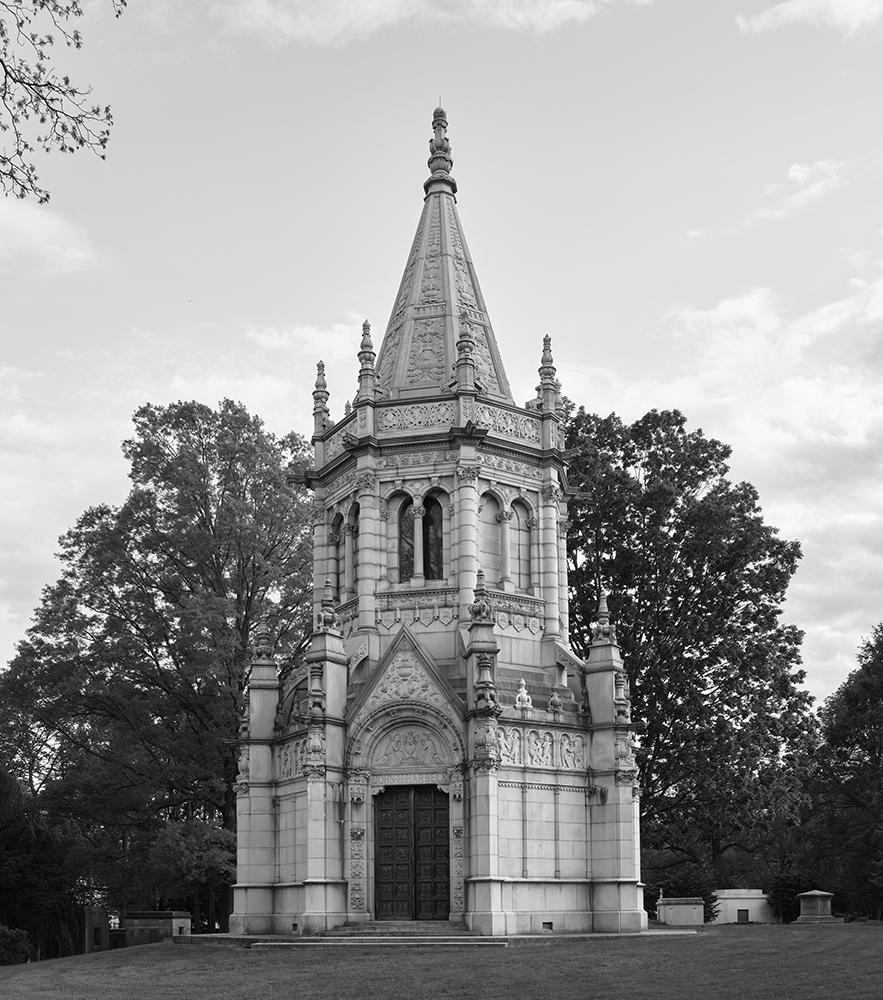 Carrère & Hastings, architects of the iconic New York Public Library, designed the Harbeck mausoleum in 1910, though it wasn’t completed until 1918. John Harbeck’s widow, Kate, traveled extensively after his death and kept adding elements inspired by her journeys, such as the front doors after those by Ghiberti at the Florence Baptistry. Francesco Lagnese

The concept of a cemetery as we now know it didn’t get going until the 19th century, when ballooning urban populations made it impractical to keep depending on the same crowded congregational graveyards. The concurrent rise of Romanticism and a cultural pining to commune with nature offered an elegant solution: Build secular burial grounds just outside the cities where people could retreat for moments of quiet contemplation. This new type of cemetery was actually the prototype for today’s public park, which at that time still did not exist. 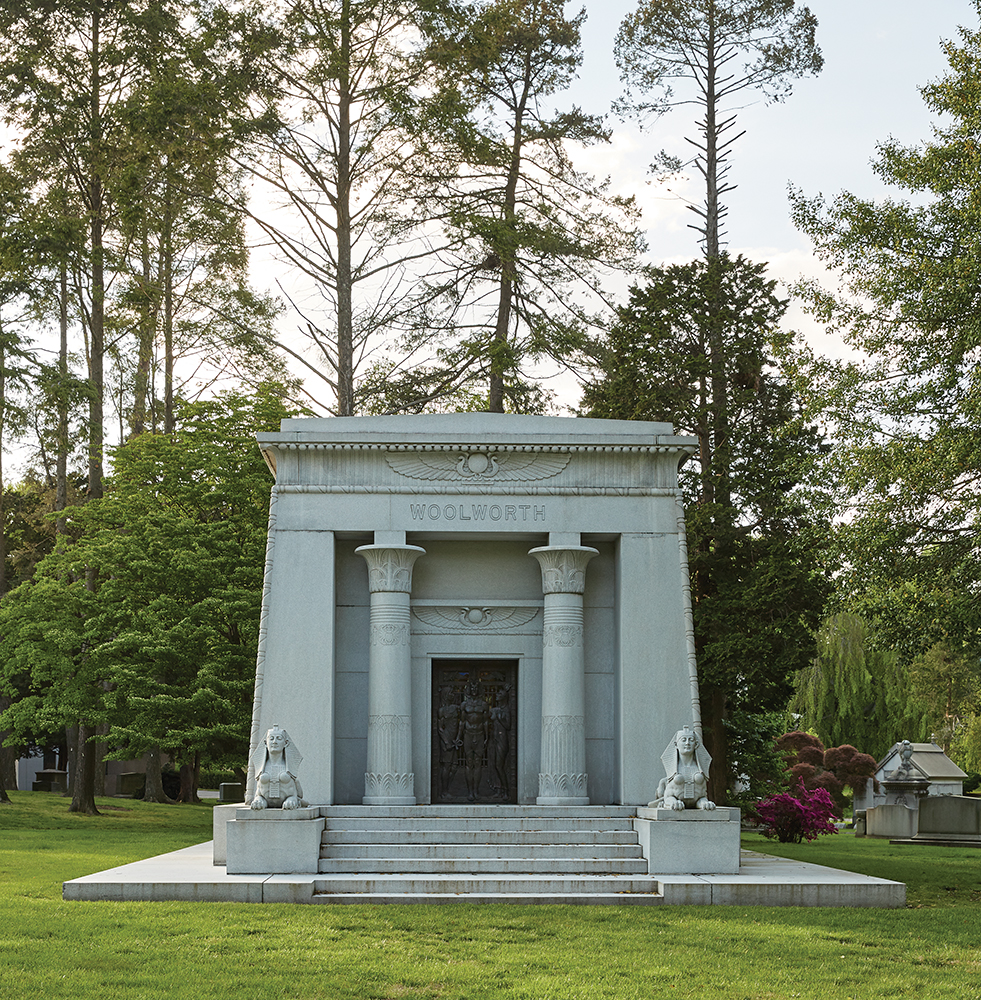 Retail tycoon Frank W. Woolworth was obsessed with Napoleon’s Egyptian campaigns. For his mausoleum, he tried commissioning architect Cass Gilbert, whom he had used for his Woolworth Building in Manhattan, but Gilbert balked. Farrington, Gould & Hoagland executed the project in 1919 in the Egyptian Revival style. Woolworth’s granddaughter Barbara Hutton is also buried here. Francesco Lagnese

In 1804, Paris’s Père Lachaise opened as the first “rural” or “garden” cemetery. Others swiftly cropped up across Europe and the U.S., including Green-Wood Cemetery in Brooklyn, which immediately became the most prestigious burial site—not to mention picnicking spot—in the New York City area. 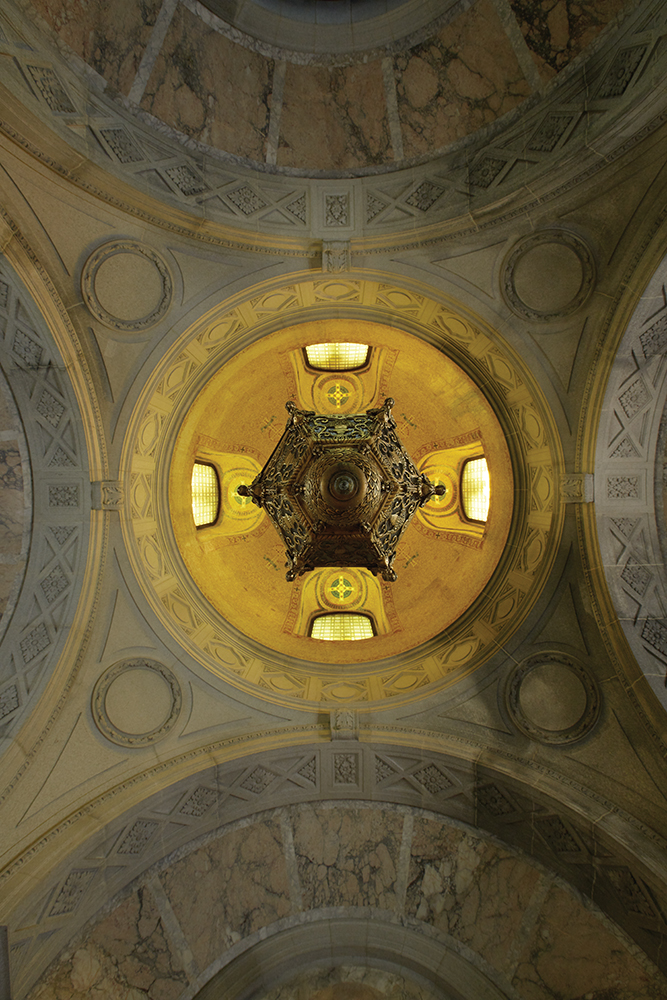 Looking up at the ceiling of the 1910 Harbeck mausoleum. It’s the only monument at Woodlawn wired for electricity, even though there was never an electrical line. Francesco Lagnese

But by the 1860s, the aesthetic mood had shifted. The meandering paths and fenced-in plots of the rural-cemetery movement were rejected at Woodlawn for gently curving roads, larger lots and wide-open vistas. This “landscape lawn” style featured spaces visually united by memorials and plantings that served as organizing focal points—ideal for showpiece mausoleums. 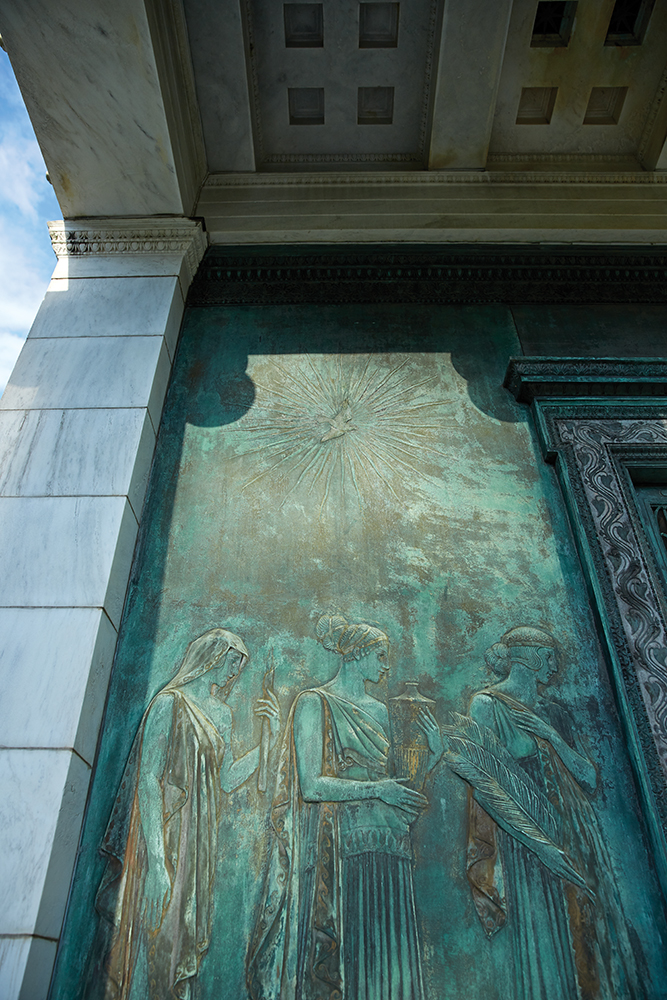 The founders of Woodlawn had also made some canny real estate decisions. Their tract sat right next to the new Harlem rail line, which meant that Manhattan was just a quick 35-minute ride away; private Woodlawn rail cars could even be rented by mourners and day trippers. From the beginning, this was key to Woodlawn’s marketing pitch: It was easy to get to. By contrast, a funeral procession from Manhattan to Green-Wood involved a schlep through the clamoring city, a ferry across the river, and another schlep deeper into Brooklyn. Getting to Green-Wood was an ordeal. Getting to Woodlawn was dignified. 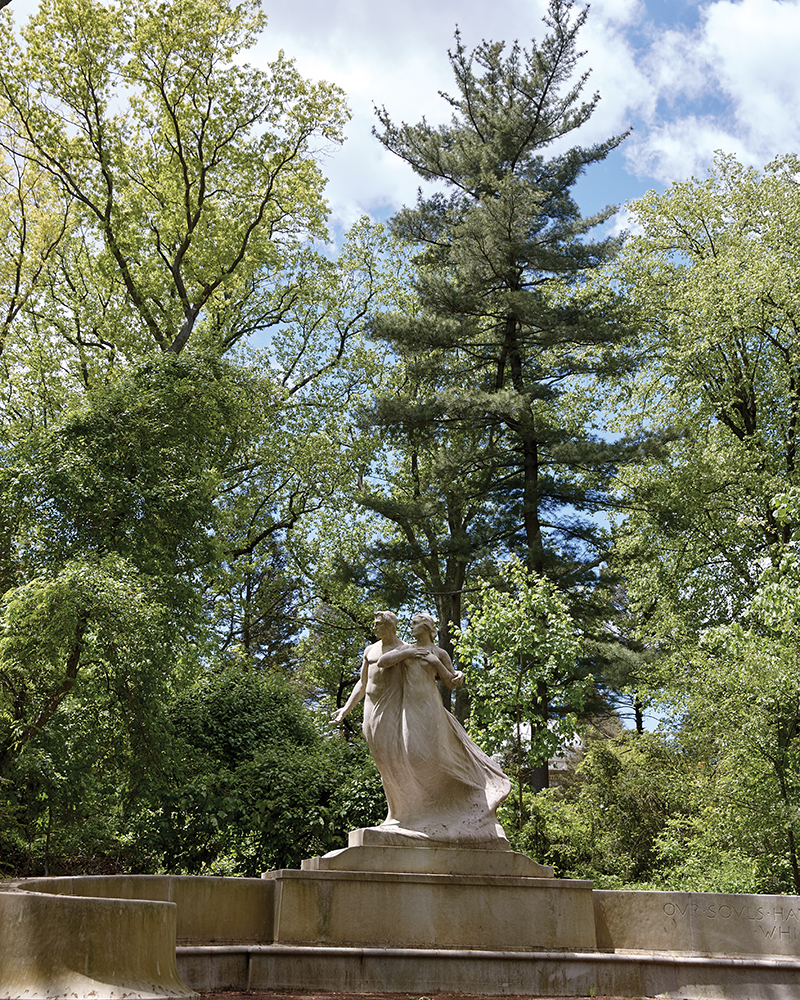 The first interment at Woodlawn occurred in 1865, but it was really Jay Gould, the controversial railroad tycoon and financier, who threw down the mausoleum gauntlet in 1884. After securing the largest circular plot in the entire cemetery, Gould commissioned an imposing granite temple with an interior faced in polished pink Tennessee marble. Critics hailed it as the finest Grecian architecture in the country. The fervor for showstopping mausoleums was on. 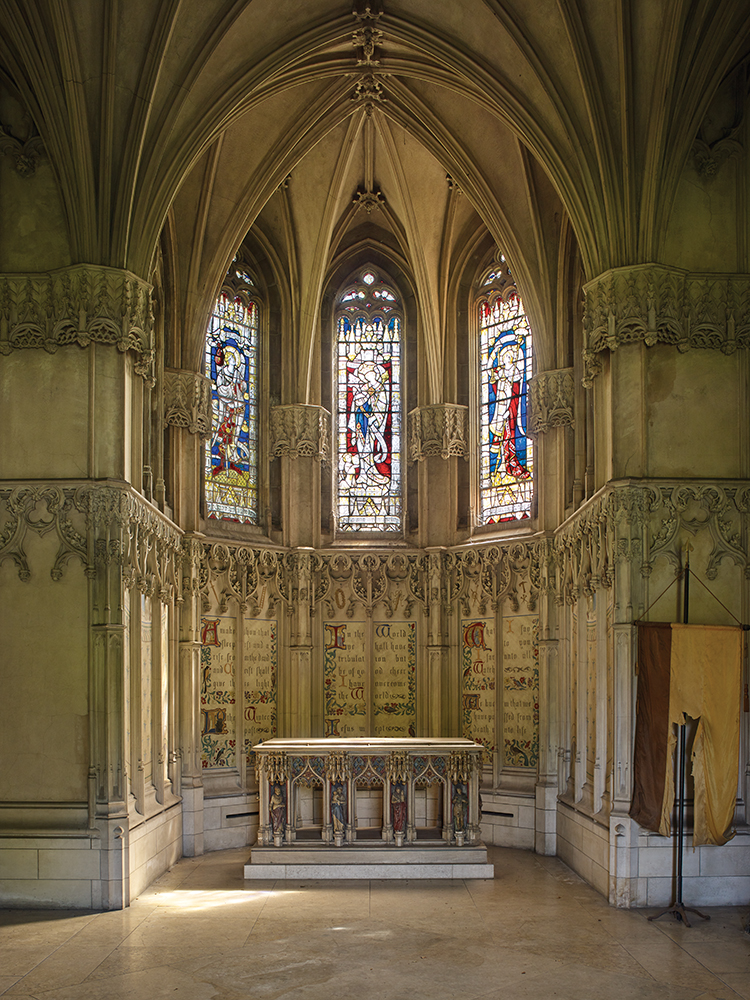 The list of architects who designed mausoleums at Woodlawn reads like a who’s-who of the era’s most prestigious firms—McKim, Mead & White, Carrère & Hastings, James Renwick, John Russell Pope—many of them commissioned by the same clients whose enormous homes they had also built. Even Sir Edwin Lutyens, who only has one other work in the U.S., the English Embassy in Washington, D.C., designed a memorial at Woodlawn. 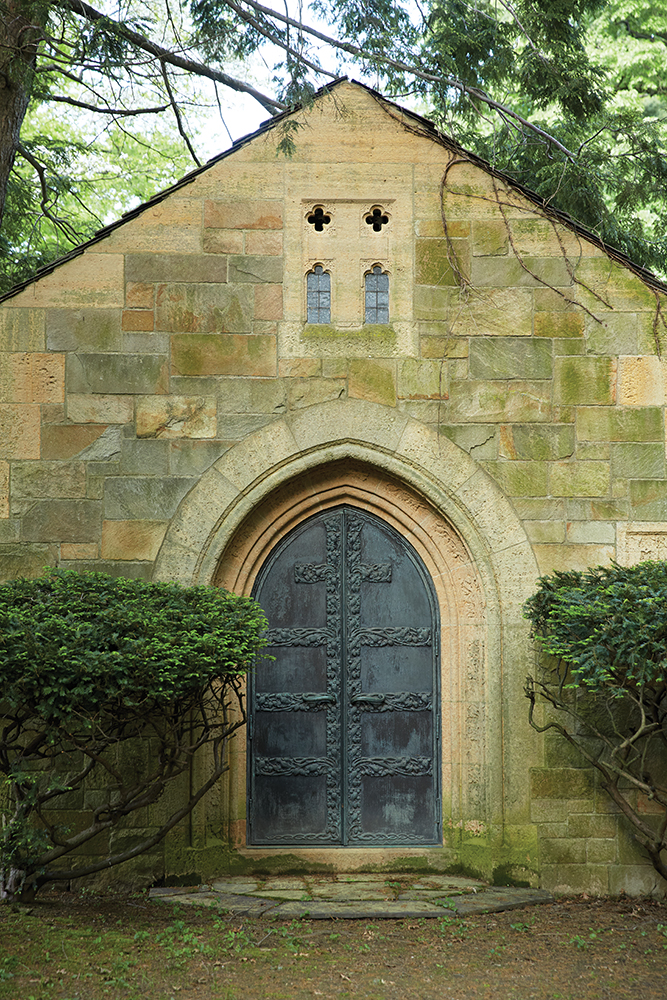 Constructed from gold-hued Mankato stone, the Hurd mausoleum was designed in 1929 in a simplified Gothic Revival style by J. Robertson Ward. Francesco Lagnese

But contrary to homes, which of course required a slew of complex functional systems, the mausoleums were more like follies that let the architects’ imaginations take flight. And did they ever. The influences of Paris’s Ecole des Beaux Arts and Chicago’s 1893 World’s Columbian Exhibition unleashed a rage for Revival-style architecture in the U.S., and this is on marvelous display in Woodlawn’s mausoleums.

Greek Revival sits next to Gothic Revival sits next to Egyptian Revival sits next to Baroque, all of them designed by leading architects and executed by top craftspeople, often with contributions from prominent artists. There are stained-glass windows by Tiffany and John La Farge, tiled arches by Guastavino, bronze doors by Gertrude Vanderbilt Whitney (who’s also buried there in her family’s lot). Most of the mausoleums were built while the owners were still alive, and many of the design details poignantly reflect their owners’ personal passions. 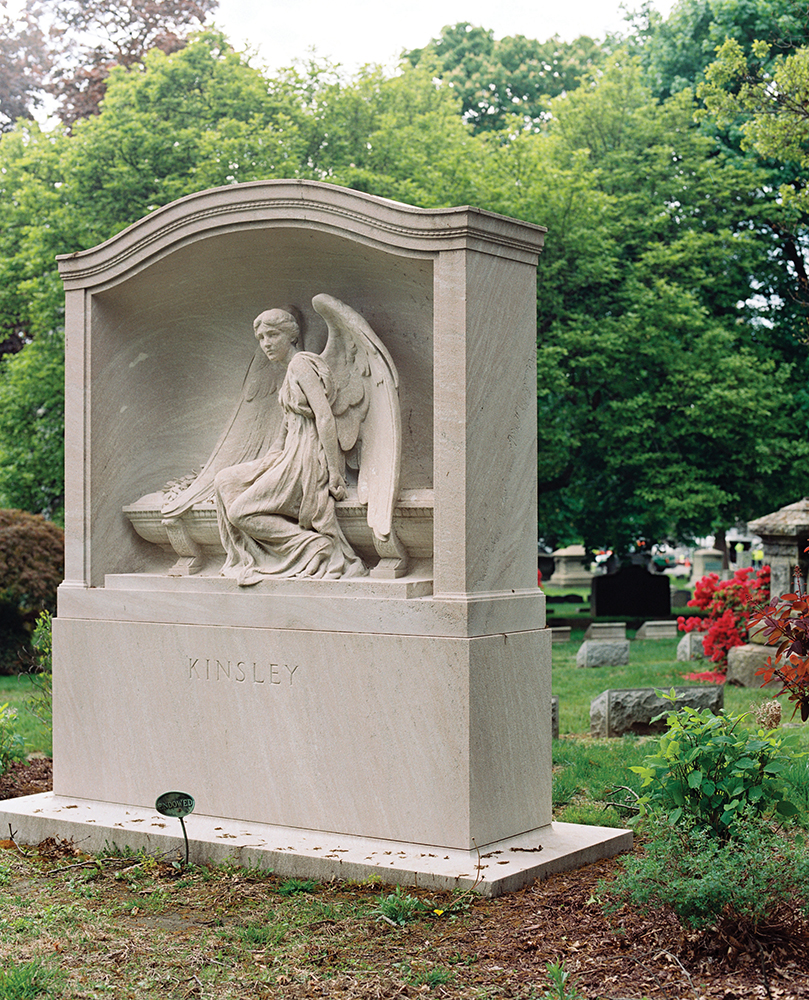 While the cemetery association took care of Woodlawn’s general grounds, the planting of individual lots was left to the families, so naturally the era’s preeminent landscape designers were put to work too. Beatrix Farrand, the Olmsted Brothers and Ellen Biddle Shipman all created multiple schemes at Woodlawn, but since gardens need constant care and are more expensive to maintain over the years than mausoleums, the vast majority of these original landscape designs have disappeared. 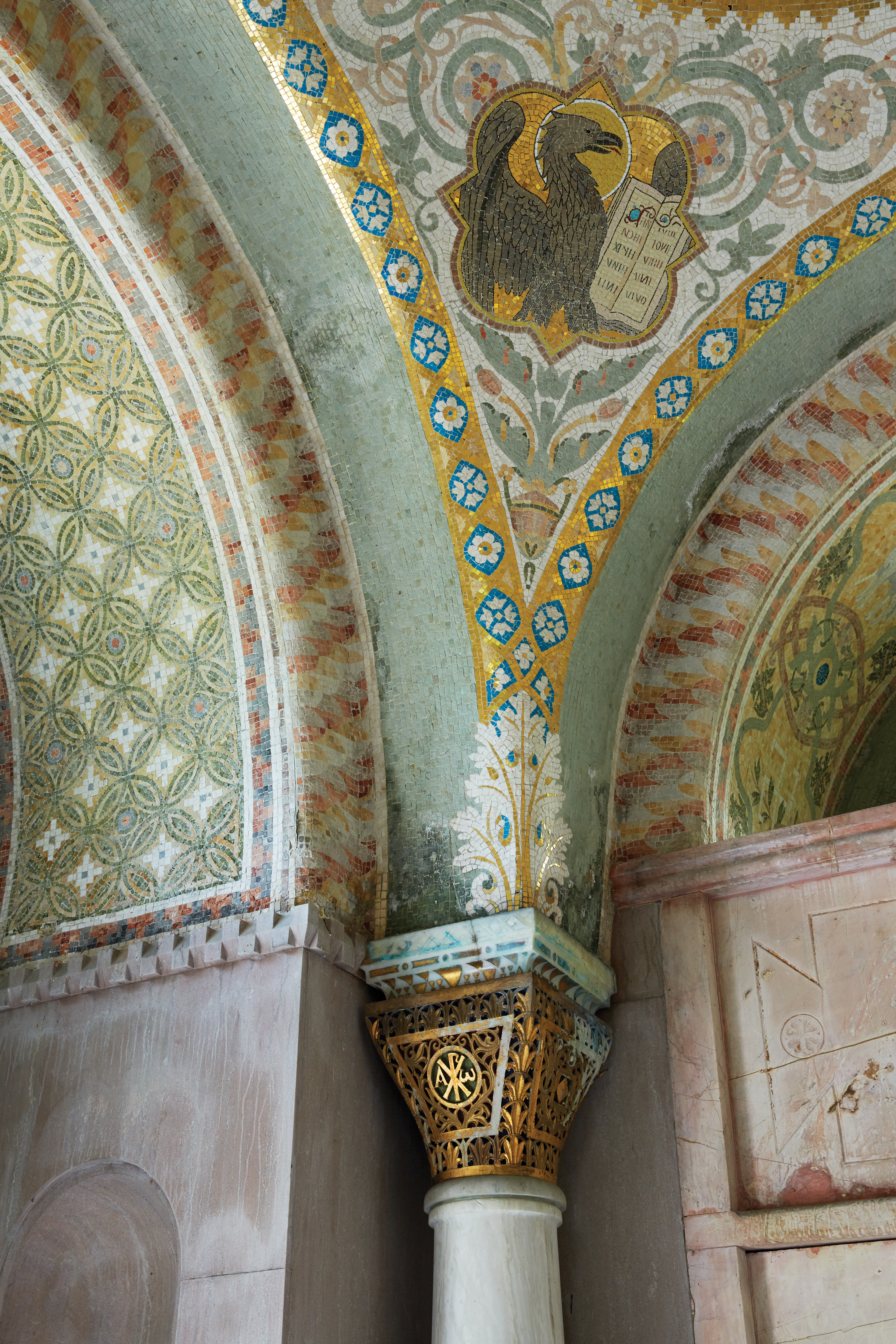 A detail of the Tiffany mosaics in the Morosini mausoleum, which was designed by Kent & Jardine in the Renaissance Revival style in 1884. Francesco Lagnese

Fortunately, the conservation program at Woodlawn is exceptional, and restoring original planting plans is one of its thrusts. The cemetery also runs a masonry-preservation course, numerous initiatives with local schools and countless themed tours. Despite being a century-plus-old necropolis, the place is teeming with life. 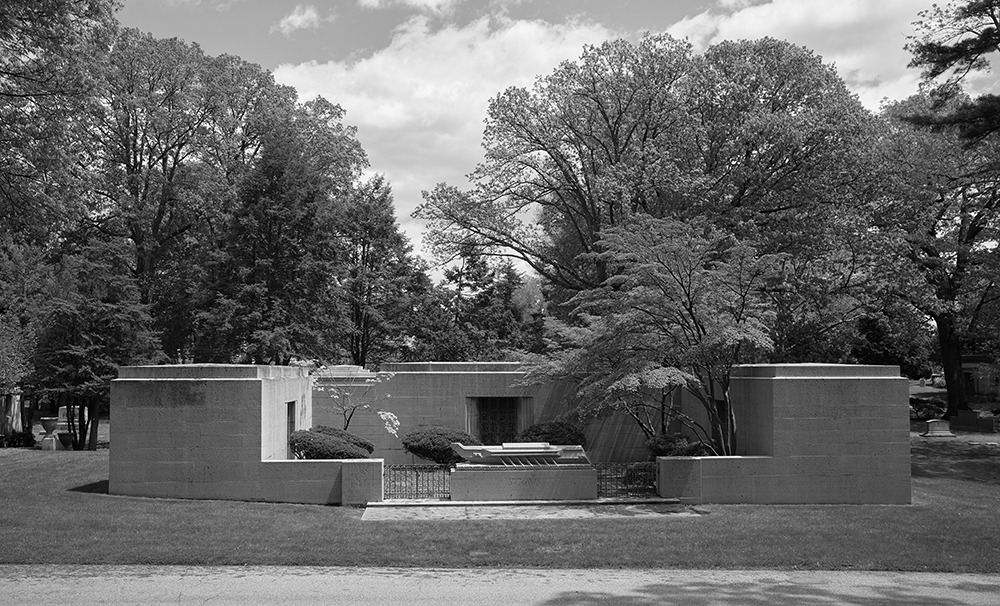 The 1928 Straus mausoleum was commissioned from James Gamble Rogers by the children of Isidor and Ida Straus. The couple, who owned Macy’s, drowned in the sinking of the Titanic. An Egyptian Revival funerary barge represents the passage to eternity. Isidor’s remains were recovered at sea and are interred inside the mausoleum, but Ida’s remains were never found. Francesco Lagnese

The number of interesting people buried at Woodlawn—from Herman Melville and Elizabeth Cady Stanton to Miles Davis and Celia Cruz—makes for a fascinating wander. But for any self-respecting design lover, the mausoleums and monuments make a piligrimage imperative.

What are you waiting for? Carpe diem.