6 Ways to Live Beautiful, According to Athena Calderone 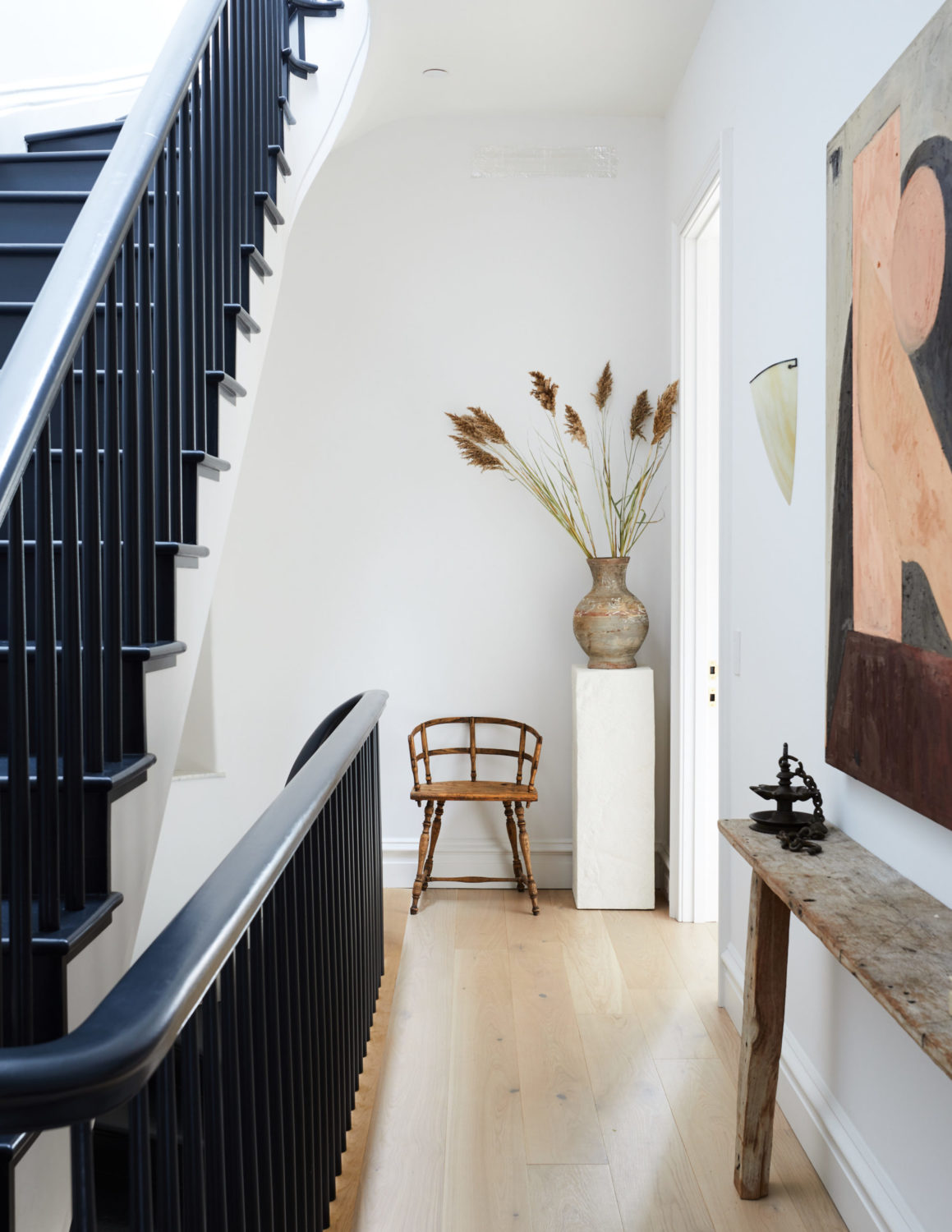 In her second book, Live Beautiful, designer, aesthete and EyeSwoon blogger Athena Calderone takes a deep dive into the homes of 19 creatives across the globe and explores the inspiration and soul behind the decor and architecture.

“When it comes to the design of our homes—and the carefully curated objects that comprise them—what intrigues me most is how the decisions that lead to an end result are rarely obvious,” Calderone eloquently writes in her introduction. “The aesthetics we create are an accumulation of seemingly small decor influences—a sofa you first spied in a shelter magazine that sent you on a hunt, ancient Greek columns that solved a hallway dilemma, or a mural that guides the painterly palette of your home. From a wellspring of inspiration, a dialogue begins, and the language of a room takes form, gently carrying you to the next decision. I want to amplify these quieter creative moments, because they are far louder than they seem. These are the choices that reflect our individuality and shape the alchemy in our homes.”

“Oftentimes, this visual chemistry is difficult to articulate,” she continues. “It is the composition and silent space in between things, a wordless expression, a hybrid of contrasts that can cause both tension and curiosity. It is a personal journey steeped in spontaneity and trusting our eye.”

Here, we’ve excerpted the six design ideas we’re most crazy about in this wonderful new tome.

Hallways Are Rooms, Too!

“Transitional spaces—stairways, hallways, landings—are often wasted design opportunities,” notes Calderone of the late 1800s Greek Revival townhouse she shares with her family in Cobble Hill, Brooklyn. “In this hallway, which leads to our bedroom, I cut a console in half to fit the hall’s shallow depth and used it as an anchor, while a plinth with a vessel tucked into the landing corner adds a statuesque quality. Search for furniture with a thin profile and consider retrofitting to accommodate your space. Hallways are also ideal places to play with verticality.” 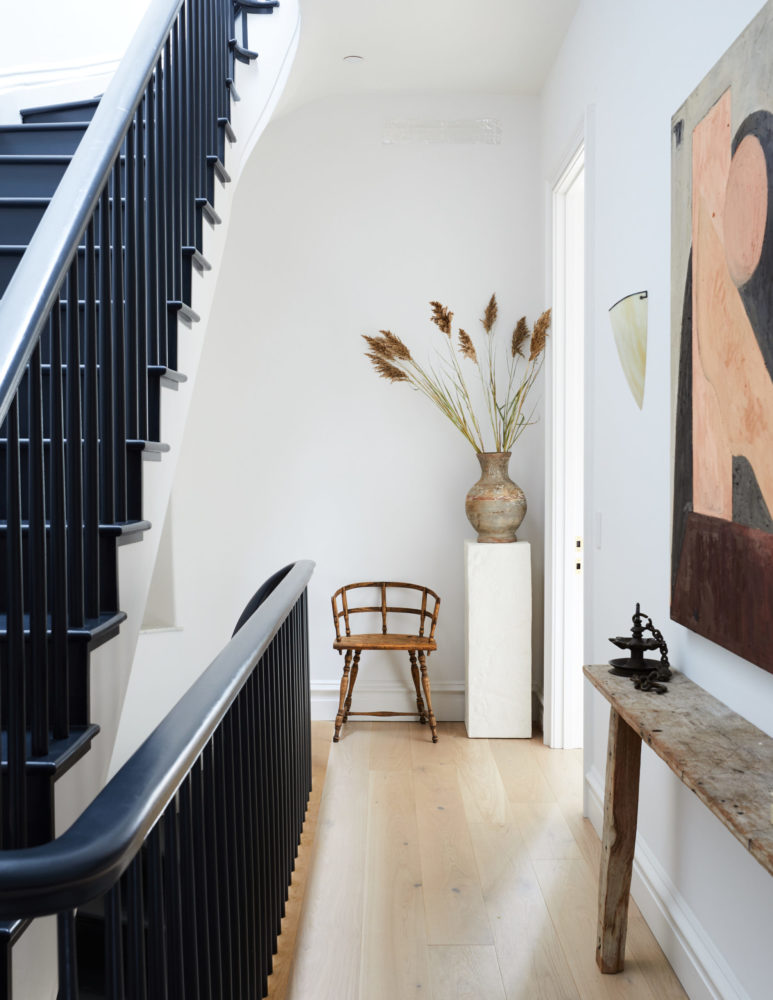 A curved-back chair, pot of wildflowers and abstract painting make for a contemplative spot in the staircase landing of Athena Calderone’s Brooklyn townhouse.Nicole Franzen

“Unlacquered metals like bronze and brass are initially shiny and gold. The material will naturally age over time. You can accelerate the oxidation process by allowing the material to engage with the elements outdoors—or by spraying the metal with saltwater, as Jenna [Lyons] did to coax the green patina on the baroque-style bronze vanity legs in her master bathroom. It mimics ocean air, rapidly speeding along oxidation. Think Statue of Liberty!” 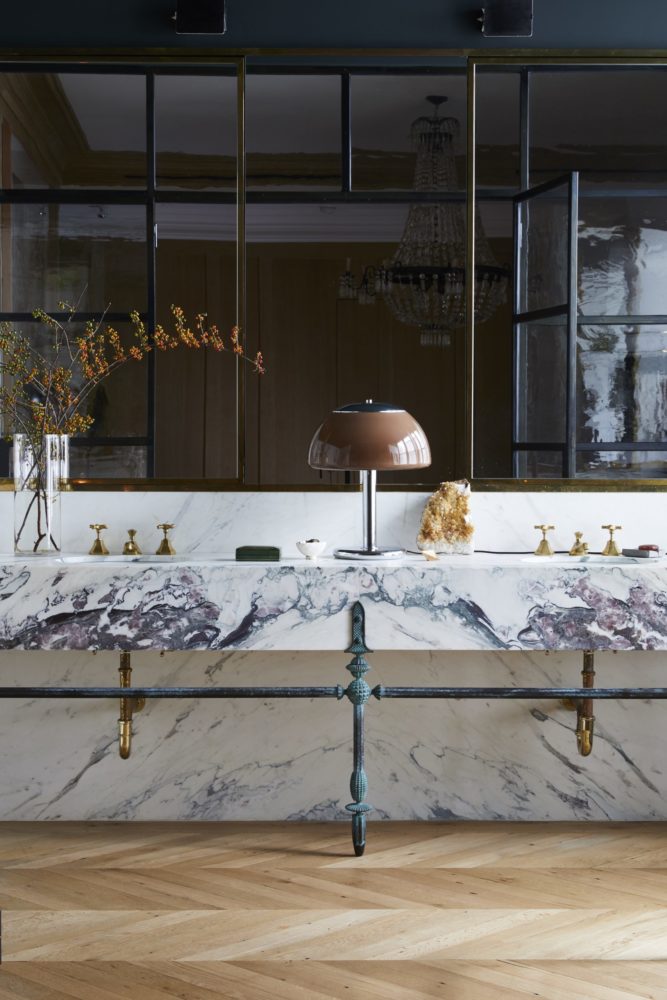 “I love a sense of history in something. I love a patina, I love seeing someone else’s touch, or seeing a stain, or seeing a nick or a chip. Materials get soft and they get round and they change color,” says Jenna Lyons, whose turn-of-the-century Soho loft is pictured here. A bathroom at the Gritti Palace in Venice inspired her to source monumental and vigorously veined marble for her own.Nicole Franzen

“Sometimes subtraction, not addition, is what a home calls for. Robin [Standefer] and Stephen [Alesch, the husband-and-wife duo behind Roman and Williams] peeled back the drywall that was concealing the humble and beautiful wood frame and beams that lay beneath. The undone look gave the [Montauk, New York] house a relaxed, rustic feel immediately—just what the couple was after. Remember that adding and layering is not always what the doctor ordered in home renovation.” 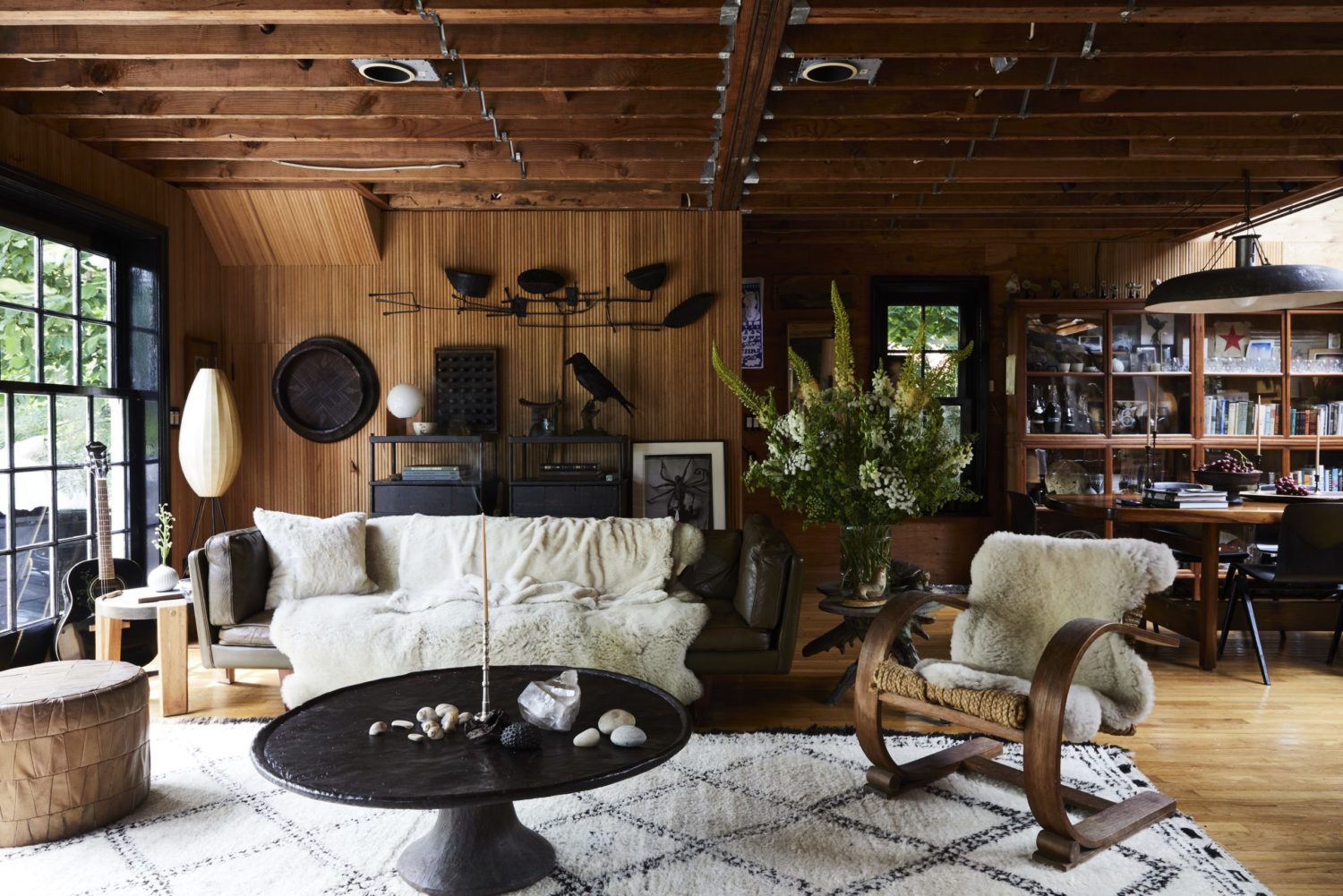 Simultaneously raw and artfully collected, the 1950s Montauk, New York, home of Robin Standefer and Stephen Alesch seems deliberately considered yet so disarmingly casual. They like it that way. It allows their minds reprieve to wander.Nicole Franzen

“Painting hallways and stairwells a different color is an elegant way to signal transition within a home. Kearnon [O’Molony] breaks from the warm wood of the house in the stairwell to his bedroom, which he had painted a crisp, Grecian-bright white. In addition to creating a beautiful contrast, it offers an uncluttered, seamless portal to the private part of the home, allowing the mind to reset.” 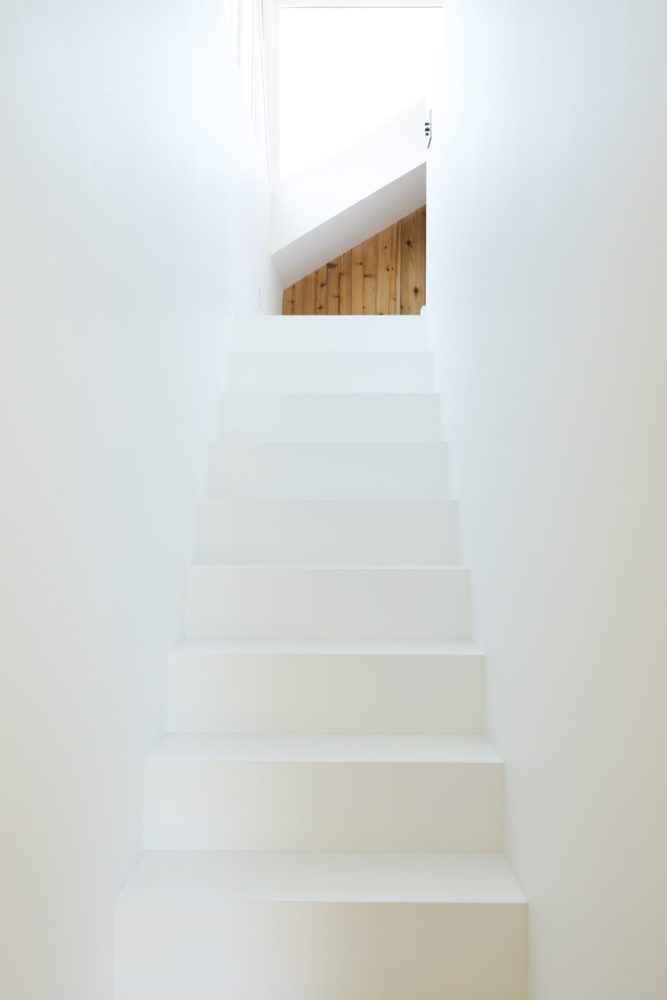 In Kearnon O’Molony’s Amagansett, New York, retreat, the moment you cross the threshold to go upstairs, you enter another dimension. A crisp white stairwell leads to the master bedroom. A stunning play of geometry greets you, juxtaposing stark white and warm wood; the contrast is exhilarating and nearly cinematic.Nicole Franzen

“Highlight the original by juxtaposing the new. Establish a conversation between the historical and the modern by choosing two wall treatments to designate time periods. Danielle [Siggerud, of Danielle Siggerud Architects] applied a warm, sandy finish to the original walls and used a stark, clean white for the newly built. You don’t have to have a unified approach to every surface in your home.” 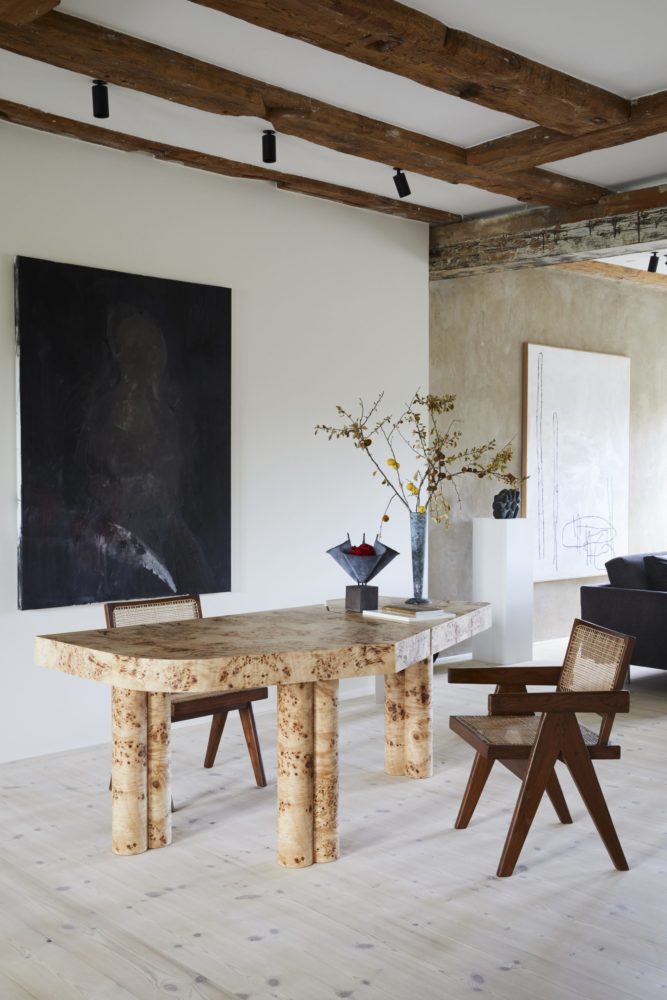 In Danielle Siggerud’s Copenhagen home, old and new mingle with ease, both architecturally and decoratively. The building’s original seventeenth-century beams, which had been obscured during previous incarnations, lend a statuesque, rustic framework to the home. They act as a skeleton, supporting the contemporary elements Danielle has orchestrated around it.Nicole Franzen

“Play with the contrast of excess and minimalism. In the dressing room and bedroom [of Apparatus’ Gabriel Hendifar and Jeremy Anderson], there are a plethora of rich textures, finishes, materials, and hues that read both rich and luxurious. The restrained use of a few furniture pieces, however, and a diminutive painting of Jeremy’s ear over the bed, juxtapose the lavish materiality. Contrasting extremes yields powerful statements.” 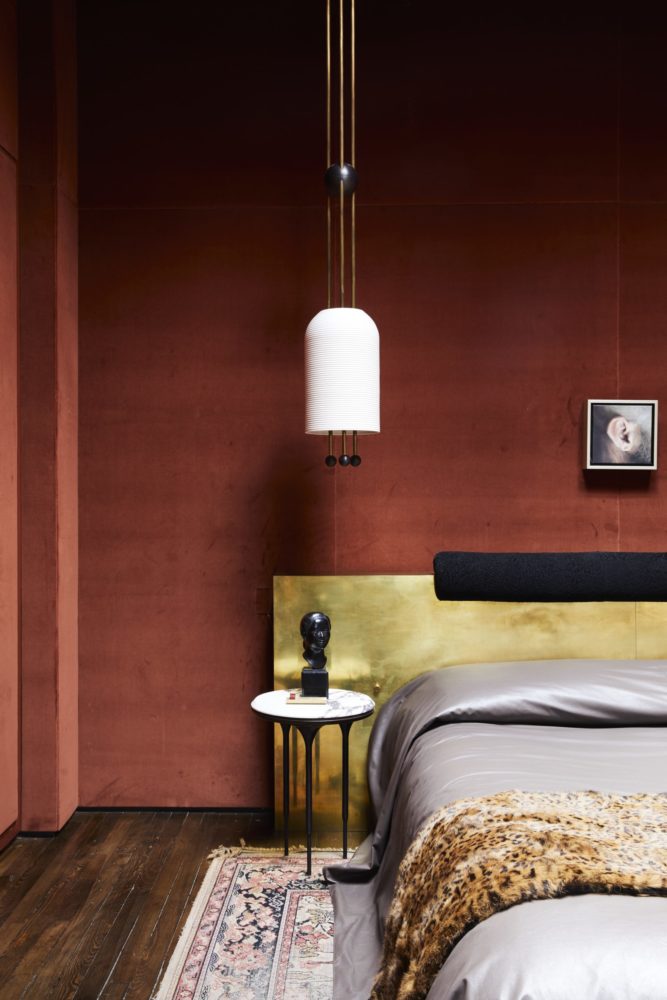 The Manhattan bedroom serves as a repository for long-fantasized-over influences. Gabriel replicated a leather coverlet after seeing one designed by Ward Bennett for the Agnellis’ bedroom in Rome. Inspired by a show they had seen at the Prada Foundation, the walls are swathed in a sultry, wine-hued velvet, which turns the space into a decadent jewel box.Nicole Franzen 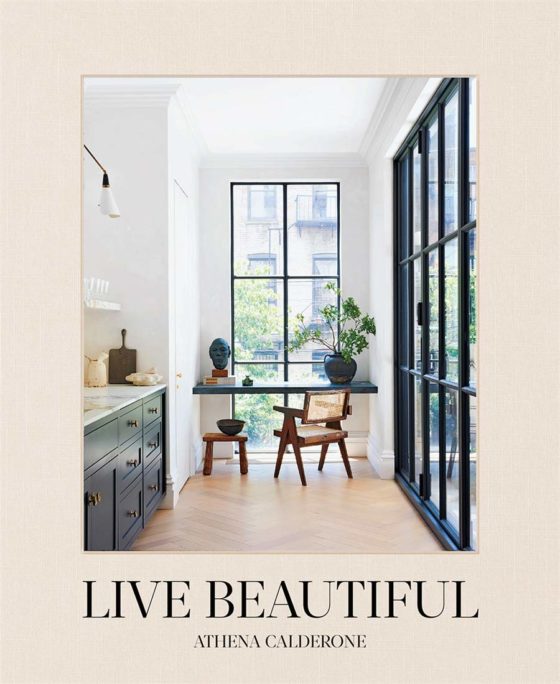