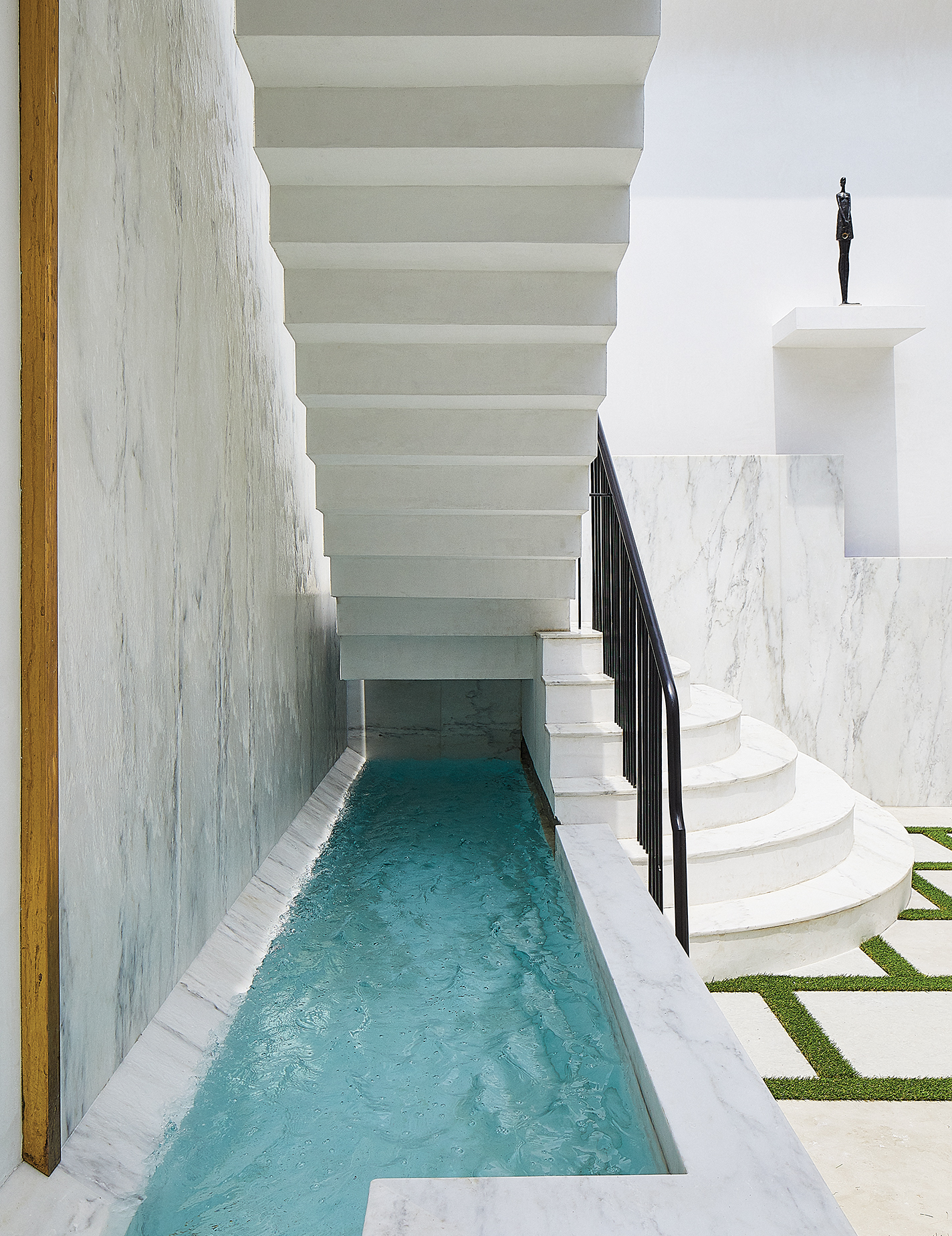 In March 2016, architect Jeffrey Dungan, known for his savant-like ability to temper traditional forms with a fresh jolt of sophisticated modernism, received a call from a potential client named Stephen King. Like the novelist whose name he shares, the Wyoming-based entrepreneur is intense about both his work and his time off (the writer King is famously in a rock band comprised of authors; the client is an avid outdoors- man and epicurean). He had seen Dungan’s work in magazines, and when, on a work trip to the Florida Panhandle, he stumbled on a little-known luxury development taking shape along Route 30A on the Gulf of Mexico, something clicked.

Alys Beach’s several hundred homes are modern, stark white and sculpturally boxy, on small lots that enable a sense of walkable urbanism. Begun in 2003 on 158 acres (and named after Alys Ste- phens, who, with her developer husband Elton, bought the land back in the 1970s), the community stands in contrast with other wealthy enclaves dominated by low-slung sprawling estates or stacked condos. Alys—pronounced like the girl who got lost in Wonderland,and referred to by residents with that single moniker, as though she were a friend—has the unreal beauty of a Bahamian Brigadoon.

“When Jeff picked up the phone,” King recalls, “I said to him, ‘You don’t know me from a ham sandwich, but I want to come see you.’” Soon after arriving at Dungan’s office in Birmingham, Alabama’s charming English Village district, he told the architect that he was buying two plots in Alys so he could “spread out a bit,” and wanted a home for himself that was more interesting than the conventional white-on-white cubes others had erected. Dungan, who likes to spontaneously render his ideas free-hand—a relative rarity among architects in this digital age—pulled out a card-size sheet and started to sketch. “In just a few minutes, he whipped up something amazing,” says King.

Dungan also knew exactly who to call to help him craft the interiors: the Atlanta-based designer Beth Webb, celebrated for bringing a contemporary sensibility to classic environments and employing a finely honed taste for texture as well as a painterly neutral palette of a natural modernist. Her special sauce is the easy warmth of a Southerner, which gently infuses all her spaces, no matter where they are located.

The 4,400-square-foot house, which took three years to finish, embodies a minimalist masculinity, but Webb wanted it to also be “a spiritual space.” Taking a Zen approach, she furnished it with simple but structural accent pieces that complement the soaring concrete volumes: a 19th-century French wooden stool, a rustic handwoven Spanish olive basket, a carved water bowl from Tamil Nadu in South India, a tribal chair from Nagaland in northeastern India. The coffee table in the pool house is an antique teak bench she picked up during her travels in Southeast Asia. “It’s all about the art of the edit,” she says. In the kitchen, a squared arch of moody cabinetry in reeded glass and antiqued brass contrasts with pale walls; stacks of white ceramics within turn the expanse into an art piece. Throughout, the floors are strewn with vintage Turkish kilims in airy stripes and geometric patterns, mostly from the 1960s. “They give a lot of depth and character,” she says.

The structure is impressively vertical, with three loft-like levels arrayed around a courtyard to create complete privacy. That verticality was an engineering challenge, but also an opportunity: The layout could break from the traditional living-space- opening-on-to-pool orthodoxy. “It’s a lot like a Brutalist sculpture in some ways,” Dungan says. “There’s something monastic about it.” Still, he didn’t want the place, which is made of concrete, to feel cold, so he employed his signature skill of blending myriad architectural vernaculars with an adroit elegance that avoids the cringe-worthy pastiche of the dreaded McMansion. The gothic references, peaked Jacobean arched windows, vaulted ceiling in the master bedroom and campanile-like 50-foot stair tower temper the minimalist vibe, but the concept remains sharp and pure. “When in doubt, I Axel it out,” he says, referring to Axel Vervoordt, the famed hyper-minimalist Belgian designer. In total, King’s compound required 170 slabs of marble.

Integrating the living space with water and light was another central task, for which Dungan channeled another hero, the Venetian midcentury architect and designer Carlo Scarpa, a master of radically updating historic buildings without losing their humanity. In his projects, including the legendary Brion Cemetery in Treviso, Italy, and Museum Castelvecchio in Verona, Scarpa edged concrete structures with narrow water features flowing into tranquil elevated ponds. In the King residence, the swimming pool, which is accessible from a glass-bottom catwalk that spans the living room, is on the second level, with an infinity edge that flows into a lap pool tucked beneath the floating stairs to the ground level. A large oculus in the ceiling of the pool house is actually the glass bottom of the hot tub above it.

Because King has a double lot, light streams in from all angles throughout the day. Dungan was particularly conscious of controlling the sun, which, in the Florida heat, can be especially oppressive. “I like to focus it, like a movie camera, so it only comes in from a single source,” he says. “Otherwise, it’s all just washed out and diffused.” In certain cases, he had to block off entire walls to get the desired effect, and instead of the uniform, whitewashed drywall or polished pale stone so common in new Florida construction, many of the surfaces are charcoal-hued, in a variety of complex textures that jack up the contrast and make the home feel daringly contemporary. In the office, for example, wood paneling was blackened using the Japanese shou sugi ban technique, which involves carefully slow-charring each plank; in the guest bathroom, a wall of handwrought ebony Moroccan zellige tiles are illuminated by a large round window of the sort Scarpa perfected. The lighter surfaces, mostly off-white, are equally detailed: In the main living space, a 20-foot wall is made from board-formed concrete with a limewash that renders it in complex juxtaposition with an abstract charcoal color-field canvas by the Atlanta artist G. Williams.

Webb found the space an unalloyed pleasure to work with, and both she and Dungan agree that King was a dream client. “In a way, when you have a client who lets you have such free rein, it’s harder, because you have to practice restraint on your own, and you’re so aware of that level of trust that’s been placed in you,” she says. For his part, King, who now spends much of the year in Florida, regards the creation of the home as a valuable lesson in the joy of letting go—if you choose the right people to guide the process. “In my job, I spend a lot of time value-engineering projects, trying to balance quality with cost,” says the entrepreneur, who lives with his Labrador retriever, Aspen. “But I understood that that was not possible with something on this level. I knew that Jeff and Beth were the experts.”

Soon after the house was finished, and King and Aspen had settled in, the owner got a package in the mail that brought the years- long adventure full circle: Dungan had framed the small sketch he had done during their first meeting. “What was really cool,” says King, “was how close it is to what we ended up with. I’m still knocked out by that.”