Behind the scenes of the design of a Sondheim classic. 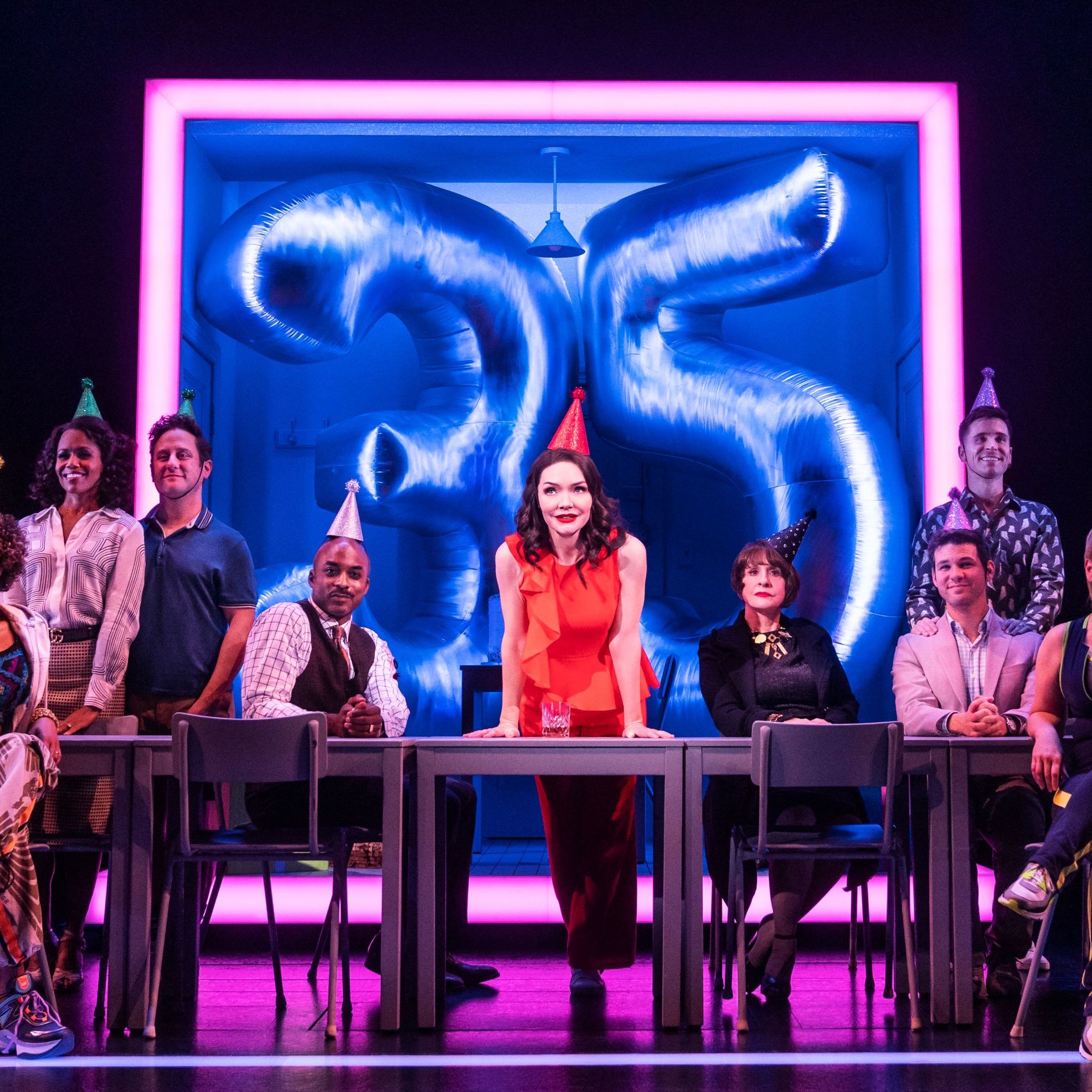 It was around half a century ago—the year was 1970, to be exact—that Stephen Sondheim’s soon-to-be seminal Company made its Broadway debut. The musical is the tale of Bobby, a perennial bachelor living in New York City who navigates the waters of being single while facing his fears of love and marriage. Surrounded by “these good and crazy people, my married friends” on the eve of his 35th birthday, the show is a series of vignettes of life in the Big Apple with memorable lyrics that stand the test of time. This Broadway season, the comedy revival gets a new twist, and not necessarily of the sort you might find in the martinis of the “Ladies Who Lunch.” Starring Tony Award–winning actress Katrina Lenk as the Bobbie, the show shifts from a male to female point of view as the storylines of the five married couples are updated for the 21st century. Famed Broadway veteran and two-time Tony winner Patti Lupone (whose show-stopping “I’d like to propose a toast” lyric brings the audience to their feet) also stars as one of the “Ladies,” a cynical, Upper East Side socialite, dripping in furs and diamonds while enjoying a cocktail or two—or three. Bunny Christie, a British set designer who won the Olivier Award for her work on Company in its pre-Covid run on London’s West End, had not seen the play before she tackled the sets. “Marianne [Elliott, the show’s director] and I talked a lot about Bobbie and the experience of turning 35, being single and surrounded by people who are coupled up, having kids, and really into family. We both experience this as we are trying to work, have careers and family, and it all felt really familiar and close to use us,” she says. That ever-tantalizing concept of peeking in other people’s homes was the driving force behind Christie’s concept for the set design. “I always loved that when you can see in people’s flats, particularly in New York City where you see all those little cubes of people living in boxes on top of one another,” she explains. “Your home is like your sanctuary, and it can also be your prison—lonely and a home and both of those things at the same time.” This translates into clever neon interchangeable boxes that house a minimalist living room (“It’s the Little Things”) and bachelorette bedroom pad (“Barcelona”). Other sets include a well-appointed kitchen right out of the pages of a design magazine (“Not Getting Married Today”), a series of brownstone entryways (“You Could Drive a Person Crazy”) and a modern disco (“Ladies Who Lunch”). For Bobbie’s apartment, the designer was inspired by the Marx Brother’s classic film Duck Soup, where Groucho is on an ocean liner and his room is continually jammed with people. Similarly, in the context of Company, Bobbie’s friends claustrophobically fill her tiny space. Designed for comedy, a sleek contemporary kitchen is the perfect backdrop for the musical number “Not Getting Married Today.”Matthew Murphy

Much of the play’s interactions are inside Bobbie’s head as she contemplates the future and the inevitable ticking of her biological clock. For the dream-like birthday scene, Christie referenced Alice in Wonderland, noting, “They are drinking bourbon and getting progressively drunker, and the idea of her falling down a rabbit hole was funny. The scenes are surreal as everything keeps coming at her.”

Color plays an essential role as the sets are composed of greyscale furnishings and walls that contrast with Bobbie’s bright red jumpsuit. “She just pings out in red; that was the happy accident. There is a vibrance about her, and you can’t take your eyes off her pantsuit,” notes Christie, who also designed the costumes. Shades of grey comprise the color palette for many of the sets.Matthew Murphy

Stage design for a live play provides its own unique set of challenges, different from film and television. “The set decor has to be minimal and practical, and you just have what you need to tell the story,” Christie details. “I want people to be looking at the performers in Company as they are the ones who are telling the story. I keep the background simple so the actors can pop out and not have a lot of business behind them.”

And since this is a musical, accommodating the songs and choreography is a key, Christie adds: “We have a limited space to tell a story, and much of it is concentrated on how to get from scene to scene. [The sets] must work musically and thematically, flow and be fun and interesting to look at. This is really a big concern of mine, the show starts on this ride, the actors are in charge, and you can completely relax and enjoy the show.”

The fact that Company still resonates so strongly with audiences today is a fitting tribute to Stephen Sondheim, who passed away in November at the age of 91.  Fortunately for us, his unparalleled work lives on forever.  And, as the great American composer writes, “Love is Company.”