Father, Son and “House of Gucci”: Designing the World of an Italian Empire

Step inside the film's stunning locales. 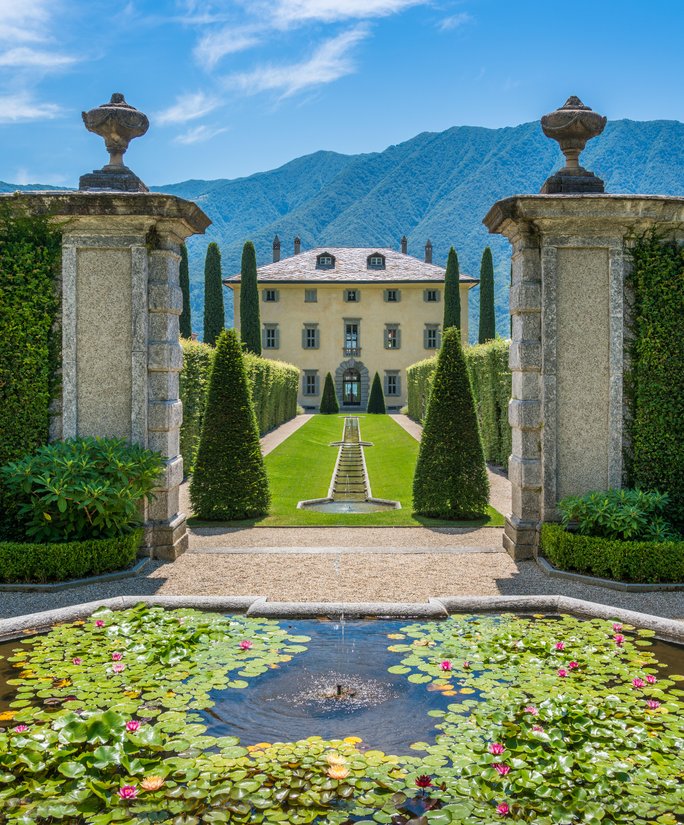 Power, wealth, betrayal, and family dynamics compete for screen time with high style, a celestial cast, and the jet-set playgrounds in the film House of Gucci. Adapted from author Sara Gay Forden’s 2001 book The House of Gucci: A Sensational Story of Murder, Madness, Glamour, and Greed, the film is part Italian crime drama and multi-generational family saga, portraying the end of the Gucci family’s control over its empire in an era of corporate takeovers. The true story centers around the ambitious Patrizia Reggiani (played by none other than Lady Gaga), who marries Maurizio Gucci (Adam Driver), son and heir apparent of the famed Italian luxury goods dynasty. The marriage ultimately ends in divorce and murder as Patrizia hires a pair of hitmen to take out her husband.

Designing the world of a family that personifies elegance and luxe was the responsibility of production designer Arthur Max and set designer Letizia Santucci. Spanning a 20-year period from 1975–1995, the sets ranged from Gucci stores and offices to Italian villas and chalets. Often resembling episodes of the 1980s and ‘90s TV series Lifestyles of the Rich and Famous, the film was shot primarily in Italy and the iconic film studio Cinecittà in Rome. Milan often doubles as downtown Manhattan, and Gressoney-Saint-Jean in the north-western Aosta Valley serves as the family’s Alpine hideaway.

“One of the challenges of this movie is we wanted to give each different character their own look that reflects their personality,” says Santucci. Fortunately for the designers, the life of the Gucci family was well documented, as magazines, videos, and photographs captured their every look and habitat—not to mention that Italy is blessed with historic villas and picturesque locales. For Rodolfo Gucci (Jeremy Irons), the company’s co-owner and father of Maurizio, the designers created an abode at the Villa Necchi Campiglio (the real star in the 2009 film I Am Love). Built in the 1930s by the family of an Italian sewing machine dynasty, the sleek Deco-style Milanese villa is designed with classic French pieces from the ‘30s to the ‘50s. “We looked at black-and-white photos of how it was dressed in the beginning, and kept only the pieces that belonged to the period,” Santucci explains.

Brother Aldo Gucci’s (Al Pacino) part-time home is recreated at Lake Como’s Villa Balbiano. Known for its stunning lakeside views, the 16th-century palazzo renovated by French designer Jacques Garcia features two swimming pools, magnificently manicured gardens, and baroque frescoes. While Aldo and Rodolfo may be related, the brothers could not be any more different, as Santucci notes: “Aldo is a bit more old-world and ‘show-offy’ and Rodolfo was much more elegant.”

After marrying, Maurizio and Patrizia inherit a Rococo-style home in Milan from Rodolfo; the real-life Villa Polisena in Rome, once owned by Princess Mafalda of Savoy, was its stand-in. Because the house was passed down to the couple, the film’s designers didn’t want it to look overly young. “It was beautiful, tasteful, and had chinoiserie that we mixed with a modern contemporary lamp to give a bit of modernity,” says Santucci. At the other end of the spectrum is the Guccis’ New York residence, dubbed the “Pop Art apartment.” Santucci and Max filled it with works by Lichtenstein, Warhol, and Rauschenberg; white walls and furniture let the art speak for itself.

Paolo Gucci (Aldo’s designer son, portrayed by an unrecognizable Jared Leto) lives in an eclectic space in Rome, complete with a family of doves. Filmed at an actual renovated warehouse in the city’s Trastevere neighborhood, the designers felt the Bauhaus-style two-story glass windows and modern architecture made it an ideal spot for a design studio. Other key sets include the Gucci store in Manhattan and the flagship boutique on Rome’s Via Condotti, designed to reflect the old-world feel of the period with dark woods and handbags reproduced from the archives. Studio 54, a favorite haunt of the family, is also recreated in all its ‘70s glory.

For a production designer, the look of a film is composed of many moving parts. Case in point: Santucci’s team carefully selected and restored a variety of ultra-luxury automobiles, including a 1991 Lamborghini Diablo, a 1969 C-Type Jaguar replica (constructed especially for the film), a 1960s vintage Mercedes 300, and a Ferrari GT4 from the ‘70s.

This being a movie about a high-fashion luxury brand (costume designer Janty Yates more than 70 pieces for Lady Gaga’s wardrobe), the sets needed to support the aesthetic. “One of the things we wanted to bring to the set was a timeless elegance of Italian style. We wanted to portray beauty in the fashions, and everything had to be at its best,” says Santucci.

From start to finish, House of Gucci is the ultimate box of eye candy. “It’s a rollicking romp with all the sounds and looks of the period and the world in which the main characters lived and played,” says Max. But it’s also more than just good looks: “As the story unfolds, you witness how these characters interact and how off-kilter their lives become,” Max adds. “A sad tale really, but told in a very entertaining way.”