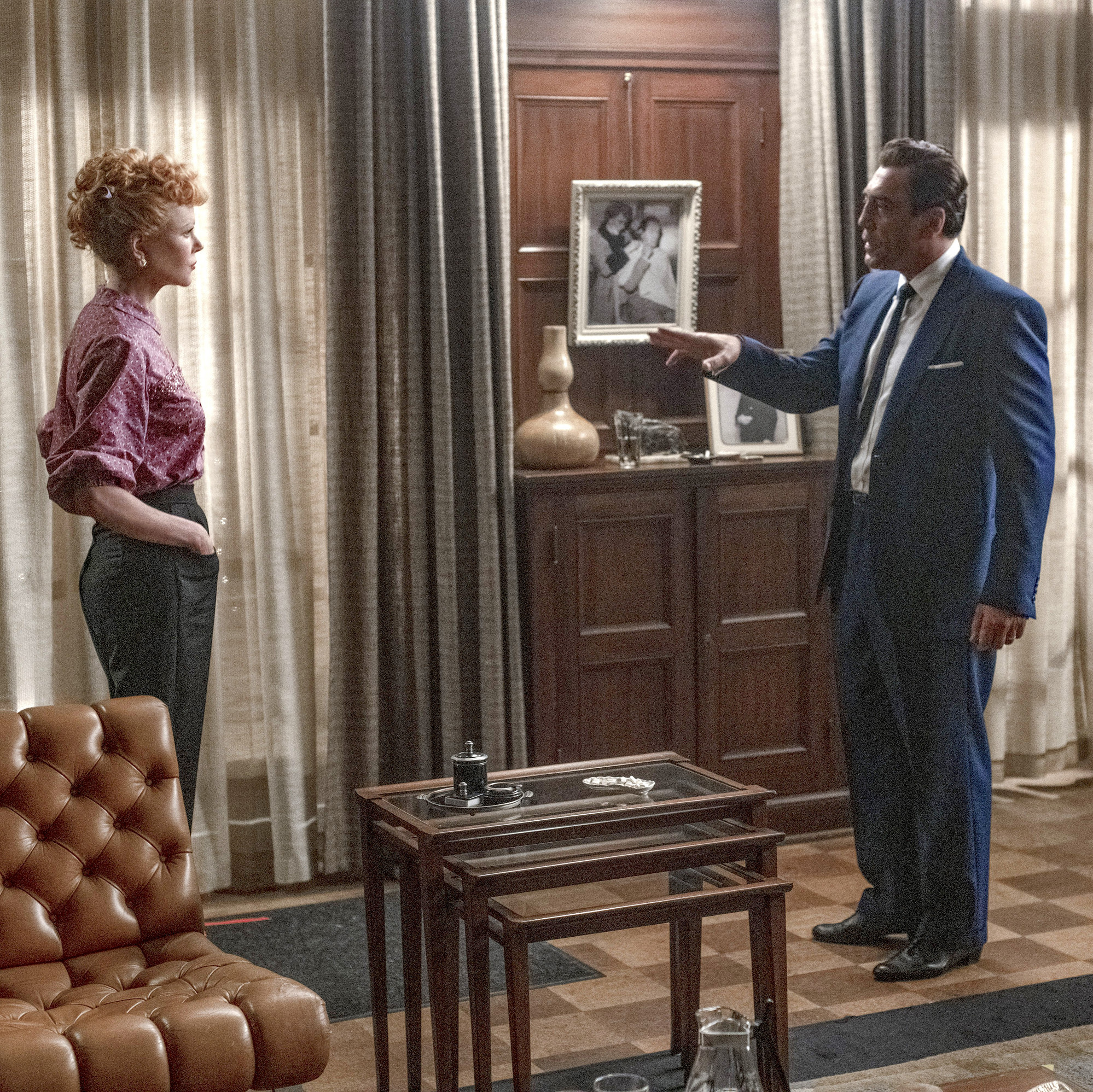 From Vitameatavegamin and Babalu to grape-stomping and conveyor-belt chocolates, the black-and-white world of I Love Lucy was responsible for creating some of television’s most iconic moments during its six-season run. Now, Academy Award–winning director and writer Aaron Sorkin (of West Wing fame) is reimagining the real-life story of stars Lucille Ball and Desi Arnaz in Amazon Video’s film Being the Ricardos. Taking place during a tumultuous and pivotal week during the show’s production, Sorkin’s film, which stars Nicole Kidman as Lucille Ball and Javier Bardem as Desi Arnaz, chronicles the effects of three crises on both their marriage and careers. While the director has noted that Being the Ricardos is less biopic than a drama about a comedy, the situations are based on real-life events, providing viewers with a behind-the-scenes peek at a day in the life of a sitcom complete with corporate battles, bruised egos, politics, and backstage dramas. Desi Arnaz’s well-appointed wood-paneled office at Desilu Productions. Seen above is a portrait of Lucy.

Production designer Jon Hutman, who won an Emmy for his designs on the pilot of West Wing, details, “My job is about trying to create an emotional reality. This is a story about what happens when your dreams come true, and now you’re worried about losing it all.” Together with set decorator Ellen Brill, they transport viewers back in time to 1951, a world comprised of soundstages and cluttered writer’s rooms, well-appointed studios and corporate offices, atmospheric nightclubs and period-perfect houses. A poignant scene early in the film sets the stage for the interiors. “They are tremendously successful beyond their wildest dreams,” says Hutman of the Ball and Arnaz, who bought RKO Studios and eventually produced Star Trek. “Home is such an important concept for Lucy. Desi asks her the first time they meet, ‘What is your dream of the future?’ And she says she wants to live in a home, where you have dinner and raise your kids. It’s this dream of family.” The Queen’s Salon on the RMS Queen Mary—now a hotel—doubled as Ciro’s nightclub. Set decorator Ellen Brill designed the bandstand and booths and chairs.Ellen Brill

Hollywood becomes its own character in the film, with Los Angeles landmarks such as Ciro’s, the Tropicana, and Desilu Productions vying for screen time. Sunset Gower Studios serves as the home of I Love Lucy and the Tropicana nightclub, while the Art Deco-styled interiors of Wilshire Ebell women’s club house other Desilu sets. The Queens Salon of the retired RMS Queen Mary (now a hotel) finds new life as the famous Sunset Boulevard watering hole Ciro’s. Brill designed 12 custom velvet-clad booths and a bandstand for the sets where Arnaz performed his classic songs “Babalu” and “Cuban Pete.” The couple’s living room in Chatsworth (recreated in a house in Pasadena) is filled with strong colors and chintz.Ellen Brill

Color plays a key role, says Hutman: “We tried to balance the reality and create a world desaturated of color, as its about [Ball’s] journey from a richly colored past to a reality that is the equivalent of black and white as her dreams of a perfect family life slip away.” Brill concurs, noting, “Jon had a pretty tight color palette. He wanted the colors to be quite vibrant in the house when you first see the couple. We used really deep tones and big florals and dark, intense colors.” Likewise, when Ball and Arnaz first meet on the film set of Too Many Girls, vibrant reds are used to portray the passion. As the film progresses and their relationship (and home life) deteriorates, says Brill, “The colors become more and more muted, with lots of taupe and beige.” Dressing the sets was a dream for Brill, an interior designer (and a nine-time Emmy nominee.) She filled Ball and Arnaz’s ranch in Chatsworth and their sophisticated home in Beverly Hills are with custom matching chintz window treatments, chairs, and sofas. The ‘50s-style sets involved so many floral curtains that Brill had to hire a full-time draper. Period wallpaper designs were meticulously copied and often decolorized for a faded, aged look. Accessories were an important element, particularly vintage cigarette cases and ashtrays, as smoking was a sign of the times. (The cast and extra smoked some 3,000 herbal cigarettes during the course of filming.) While Brill once had to scour trash cans for used cigarettes to use as props, now, “there are machines that smoke cigarettes and burn it down to the butts,” she explains. The iconic set of I Love Lucy was faithfully recreated right down to finding the original coffee table.Ellen Brill

And what about the most memorable living rooms in television history? The living room set of the Ricardos’ Manhattan apartment (set at the fictional address of 623 East 68th Street, #4A) is decorated in modest middle-class style, with paneled doors, a simple wood-and-red-brick fireplace, and a mahogany desk and chair, while festooned sheers and pinch-pleated valences drape the windows over the piano. Details were of the utmost importance as Brill shopped prop houses, such as History for Hire, antiques stores, and various websites to procure the exact piano (an eBay find) or a collection of beer steins. After an exhaustive search for Victorian luster candles, a pair was located on Etsy from a dealer who ironically worked on colorizing some of the original I Love Lucy shows.

And, as luck would have it, he also had the original coffee table from the living room set.