When designer Ashley Whittaker couldn’t find a house that felt just right for her family, she built her own—and imbued it with all the quirky charm of a home that’s been lived in (and well loved) for generations. 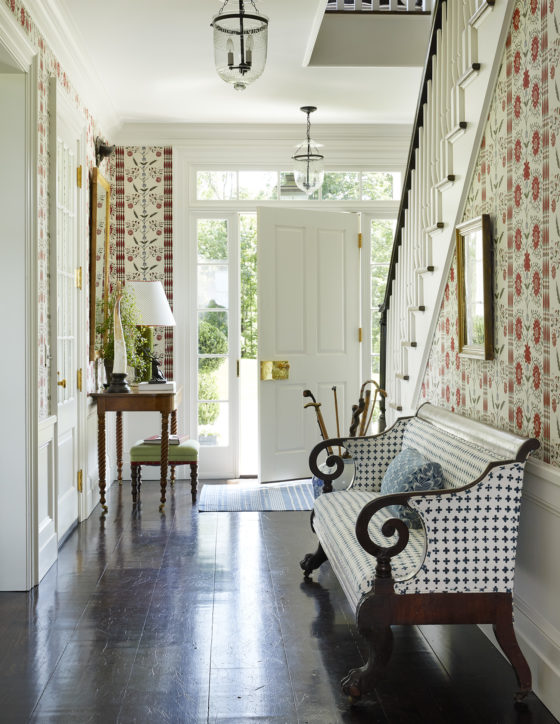 “Everyone thinks they’re reclaimed—it’s become sort of a joke!” laughs Whittaker, who splits her time between her office in Manhattan and her bucolic home in Dutchess County. In reality, “they were just the least-expensive soft pine. The floor guy said that they’re going to scratch up, and he was true to his word. A 70-pound yellow lab really helps with the lived-in look!” Whittaker at home in her living room.Melanie Acevedo

It’s a pattern that emerges as Whittaker talks about the house, which appears to be one of the many original 19th-century buildings in the famously scenic country town but is in fact a new build designed to look like it’s been there forever. It’s been given plenty of appropriate patina by a rotating cast of five, including Whittaker’s husband, Andrew Spence, two stepdaughters, and a young son—plus, of course, Dutchess the lab. “I always say the best house is a well-loved house,” she says, echoing the title of her own recently released book, The Well-Loved House (Rizzoli).

Whittaker and Spence hadn’t originally planned to build when they began house hunting several years back, in search of a home with a stunning view (Spence’s requirement) and a loggia (Whittaker’s). They soon found themselves in a Goldilocks conundrum: “We looked at a lot of charming old houses, but they didn’t have a great layout for a family,” she recalls. “And the newer houses all had those open floor plans with the great rooms and enormous kitchens, but I knew that wasn’t what I wanted.” Back-to-back sofas in a cerulean blue divide the living room into two seating areas, one for gathering by the fire, the other for watching television. Matka silk on the walls provides a “refined but not fussy” backdrop for vintage prints, hunting trophies and a pair of “witch’s mirrors” that once belonged to Mario Buatta. Chandeliers, Circa Lighting.Melanie Acevedo

So Whittaker enlisted the help of architect Michael Elfenbein to help design a home with the best of both worlds: a floor plan with distinct rooms that still felt connected, thanks to large openings and clear lines of sight, but with enough old-fashioned charm and quirky details to make them seem as if they had been lived in for generations before. “The footprint is relatively small, but the rooms are graciously sized,” says Whittaker. “It’s scaled to a family of five. There’s nothing we don’t use.” Melanie Acevedo
The kitchen is spacious enough for the family to gather in while dinner is cooking, but still manageable—“the island is sized so that you can still reach to the other side to grab a plate!” says Whittaker; pendants, Schoolhouse.
2 / Melanie Acevedo
Because the house was designed to encourage visitors (and residents) to use the front door as much as possible, the mudroom serves primarily as a storage space, where hats and coats hang on antique bridle hooks; the rug is Dash & Albert.
3 / Melanie Acevedo
A ceiling fan was a must for the oft-used loggia; the sofa pillows are in Wycombe Park and Iconic Leopard by Schumacher.
4 / The most used of all those rooms might be the main living space. “That’s our do-it-all room—our library, our TV room, our living room, everything!” explains Whittaker, who divided it into two seating areas anchored by a fireplace on one end and a wall of built-in bookshelves with a television on the other; an expanded cased opening to the kitchen means that family and guests can freely flow between the two. “It’s a ‘great room’ in that it’s a fabulous room,” she jokes.

In the living room, you’ll also find a pair of chairs upholstered in a Michael S. Smith floral print that became Whittaker’s jumping-off point for the decor. While her work leans unabashedly feminine—think candy-colored chinoiseries, skirted slipcovers, passementerie galore—Spence, an avid outdoorsman, favored a more rustic aesthetic. “I tried to find a happy medium and be conscious of both,” says Whittaker. That floral, for example, “is very true to my style but also my husband’s color palette with the blues and greens. When I showed it to him, I said, ‘Sweetheart, it’s almost a camouflage!’ ” When the weather cools down, Whittaker moves dinner parties from the loggia to the dining room. The sepia-toned scenic wallpaper and rifle-green lacquered doors are a nod to the home’s hunt-country surroundings; a crystal chandelier and curtains in a sumptuous citrine wool add a glamorous touch.Melanie Acevedo

Throughout the house, wall-mounted antlers and rough-and-tumble wood finishes mix with whimsical prints and pleated lampshades. The dining room features scenic wallpaper (a Whittaker favorite), but in subdued, sepia-toned hues. “I was trying to go out of my own comfort zone on this one and work with the regional vernacular,” the designer says. There are colorful moments, but used judiciously: doors in a lacquered hunting green, citrine-yellow curtains in a rich wool fabric. “I definitely used some restraint,” adds Whittaker. “It feels like a real Millbrook house, but I still had fun with it.” Whittaker ordered custom block-printed fabric for the walls after falling in love with the pattern on a set of napkins. Table lamp, Christopher Spitzmiller for the Lacquer Company. Sconce, Galerie des Lampes. Bedding, D. Porthault.Melanie Acevedo

Upstairs, Whittaker employed her signature mixed-and-matched prints a bit more freely, like in the guest room and a stepdaughter’s bedroom, where custom Indian hand-blocked fabric covers the walls (and, in the case of the latter, the ceiling). “When it arrived, I realized that the seams don’t quite match up and it’s not entirely straight, but when it’s your own house, it goes up,” she says. To her, embracing those imperfections comes with the territory of turning a brand-new home into a well-loved one. “Whenever something breaks, I joke to my husband, ‘Oh, you know these old houses!’ ”