A famously devoted scholar of decorating history and a master of classical interiors, New York City-based designer Thomas Jayne has never been afraid to put a subversive spin on tradition when it comes to outfitting his own Big Apple apartments. Here, Jayne reflects on how his spaces have and haven’t changed over the course of his decades-long career.

Colorful painted stripes counteract a lack of direct light in the old living room. Instead of a sofa, Jayne opted for a quartet of club chairs—a gift from his former boss, Kevin McNamara.Andrew Gan

My very first place in New York City was a tiny studio in a tenement building on East 87th Street, but my first “proper” apartment was a one-bedroom in a prewar building at the corner of Washington Square Park that I shared with my now-husband Rick Ellis—it was actually one of my first projects to be published by [FREDERIC editor-in-chief ] Dara Caponigro when she was at House Beautiful! I had my longtime decorative collaborator Chuck Hettinger paint the foyer in a deep green using our version of ragging—a process where cloth is balled up and impressed on the wall to make a random texture, which was very popular in the 1980s. Chuck used giant drop cloths to make, quite literally, a big impression. 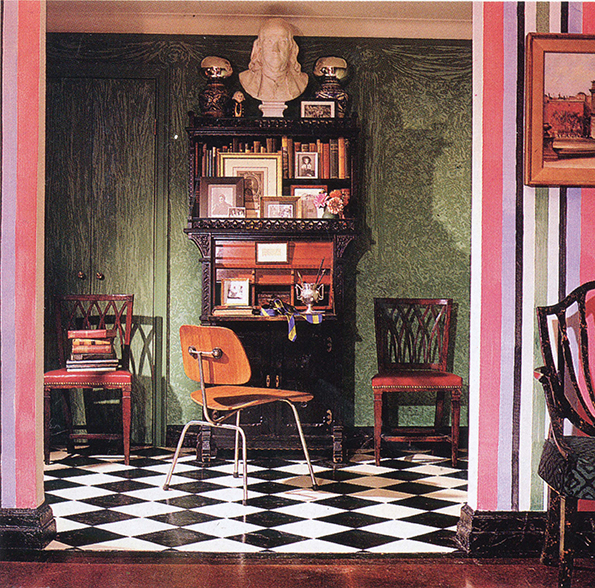 A bust of Benjamin Franklin holds court from an Eastlake desk in the entryway. The black- and-white cork floors were original to the 1929 apartment.Andrew Gan

The stripes in the living room were a bit startling, but they served well as a novel graphic device and helped brighten the space, which didn’t get a lot of direct light—we were located at the bottom of an air shaft. All of the furniture and bibelots were bought or passed on from family and friends, and they all happened to be from different eras. At the time, it was definitely quasi-radical to have an Eames chair (which I got for $10 at a flea market) sitting next to a Victorian-era Eastlake desk! The bust of Ben Franklin is now an integral part of my collection of American Worthies, along with George Washington and Marquis de Lafayette, which were originally sculpted by Jean-Antoine Houdon in the 18th century. 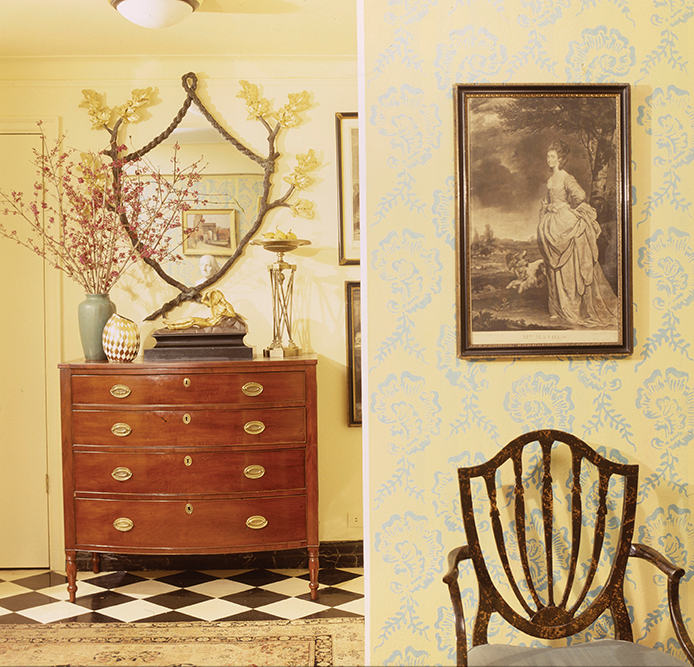 Jayne redesigned the apartment for a lighter look, moving a regency chest from his bedroom into the foyer.Andrew Gan

I thought if I redecorated I might be able to republish the apartment because I didn’t have a lot of photography of my work at the time—although I do treat where I live as something of an experimental lab. I had been looking at fancy old French wallpaper samples and they all featured a repeated paisley. The club chairs were given a facelift with buttery cognac colored leather.Andrew Gan

We eventually glazed over the stripes with a buttery yellow and added blue paisleys as an effort to make the room feel different—perhaps more settled. I think the original version was better, but this glaze was a good try. I also tried to change up the scenery a bit in the foyer by adding the shield mirror. Jayne repurposed one of his Washington Square club chairs for the “cabinet room” of his current SoHo loft, which features Mark Beard’s Couples Compromise among other curiosities.Pieter Estersohn

We ended up moving to a loft in SoHo for light and air, and to have room for Rick’s extensive collection of American cookbooks that date back to the 18th century. I was adamant that this be a classic loft and not a prewar apartment within loft walls, so none of the partitions touch the ceiling. I covered one wall of the living room with yellow plexiglass, which was inspired by the yellow glass skylight at Sir John Soane’s Museum—it was my ode to John. Another view of the loft’s cabinet room with its yellow plexiglass doors.

To alleviate my concern that our flourishing collection of objects would get visually lost in the loft if we kept it totally open, we carved out a space to form what is essentially a modern cabinet room. It’s brimming with small works of art, natural history artifacts and taxidermy—Jake the bird reigns supreme in there. Rick bought the Mark Beard painting (ironically titled Couples Compromise) without asking me, so I bought a painting of daffodils to counteract it because I wanted something alive to look at. The desk belonged to my grandparents and used to be a piano— something that is considered déclassé in the decorative arts community—but I always admired it and love having it. I like to say to guests, “No one has a room like this.”