Rose Uniacke Invites Us Inside Her Luminous London Home

A labor of love.

Known for her monastic spin on luxe interiors, Rose Uniacke has made a name for herself on both sides of the Atlantic whipping up homes for Victoria and David Beckham and screenwriter Peter Morgan, and the London headquarters of British perfumer Jo Malone. In her new limited-edition book Rose Uniacke at Home (Rizzoli), the London-based decorator opens up the doors to her own sprawling Pimlico residence—originally built by Scottish portrait artist James Rannie Swinton, who used the space as both a home and studio in the 1860s. In the excerpt below, Uniacke reveals how she, in collaboration with architect Vincent Van Duysen, rescued this historic light-drenched fixer-upper from decades of abandonment, restored it to its former glory, and fashioned a serene urban sanctuary for her family. I fell for this house years before we bought it. There was a magic. But it was too large, too damaged, and most definitely too big a project. My husband, David, and I walked away; it would be madness to take it on. But it never left me. I thought often about how I might tame its space just enough to become liveable. Three years later, it was still there. Nobody else would touch it, and we took the plunge. The house was the home and studio of James Rannie Swinton, a Scottish soci­ety portraitist, who commissioned the architect George Morgan to design it. Com­pleted in 1860 on an empty plot of land that Swinton bought on Warwick Square in Pimlico, it shares a lovely, big communal garden near the river. Warwick Square was built in the late 1840s by Thomas Cubitt, the master builder of much of Belgravia, Bloomsbury and Pimlico, who lived at number 66. I don’t know why Swinton wanted this building to be so utterly unlike the rest of the square, which is typical of Cubitt’s terraces of stucco-clad vertical houses, or why he was allowed to do it. The story goes that he was rather well connected, so he just pushed on with building the house he wanted—lateral, rather than vertical, and clad in brick, not stucco.

The whole building was designed around the north-facing window in Swinton’s painting studio. Leading to the studio is a typical Victorian gallery space with a domed glass roof, designed so his visitors could walk past his paintings on their way through. Off the studio was the room where his paints were mixed and stored. Swinton’s living quarters were at the back of the house. We started by stripping everything out so we could see what was left of the original features and how the house felt when completely bare. Layers of thick whitewash had been applied over and over for years and never sanded, so everything was horribly lumpy. It took a great deal of time to dry-scrape the house and reveal the finer details—we even found hints of red silk on the library walls, on which Swinton’s paintings were probably hung. I wanted to assess everything in its rawest form before deciding the concept and feel.

Once we’d stripped it, the house was sublime. It felt like an abandoned palazzo, with extraordinary volume in the rooms, and wonderful layers of distressed colours from years of decoration. I thought if we did a little bit of work, we could simply live in it and exist in the space in the raw, but as we started to restore and refresh everything, an interesting and exciting energy started to develop, and the restoration work became really important. It took three months to clean and restore the intricate plasterwork in the ballroom, in the course of which the real beauty of it slowly emerged. Within the hall wall supporting the stair, we were fortunate to find a fragment of stone, proving that there had once been a significant stone staircase there. So we were able to get permission to reinstate it. I looked all over London for examples of period cantilevered stone staircases as we started the research—sometimes even craning my neck to look through other people’s hall windows. The restoration and correct replacement of missing period detail was essential, and in the structural reordering of certain areas, we accurately remodeled cornicing, skirtings, architraves, doorframes, and arches, and where windows and shutters of the house were remade, the details had to be correct for the period. But after that I wanted to add a fresh contemporary flavour, without the house losing its period identity. I was determined to retain—and I hope you can feel it—a real sense of the empty house, a sense of the space in its very simplest form. But it couldn’t be cold or daunting or too grand, and it had to welcome.

I love emptiness. I am interested in the value of negative space and how negative space changes when it is in relation to the other spatial influences. The entire volume of a room matters. Plain space can be sad, but it can also be very powerful, uplifting, or soothing and restful. In the way that an anteroom acts as a moment of repose before entering a room, open space can do the same within a room itself. An empty wall can feel undone, or it can feel like a strength. So, I wanted enough emptiness for us to read and enjoy the bare architecture. At the same time, I was interested in reducing the grandeur, simplifying it. The scale of the house could easily have been overwhelming and it is heavily adorned. By treating it lightly, I hoped to let its spirit speak while still having a family home in which to live and work. It feels as if Swinton commissioned the house with similar aims in mind. It was very much a place intended to empower him in his work as an artist, but he also had a clear view of the enjoyable way in which he washed to live here. 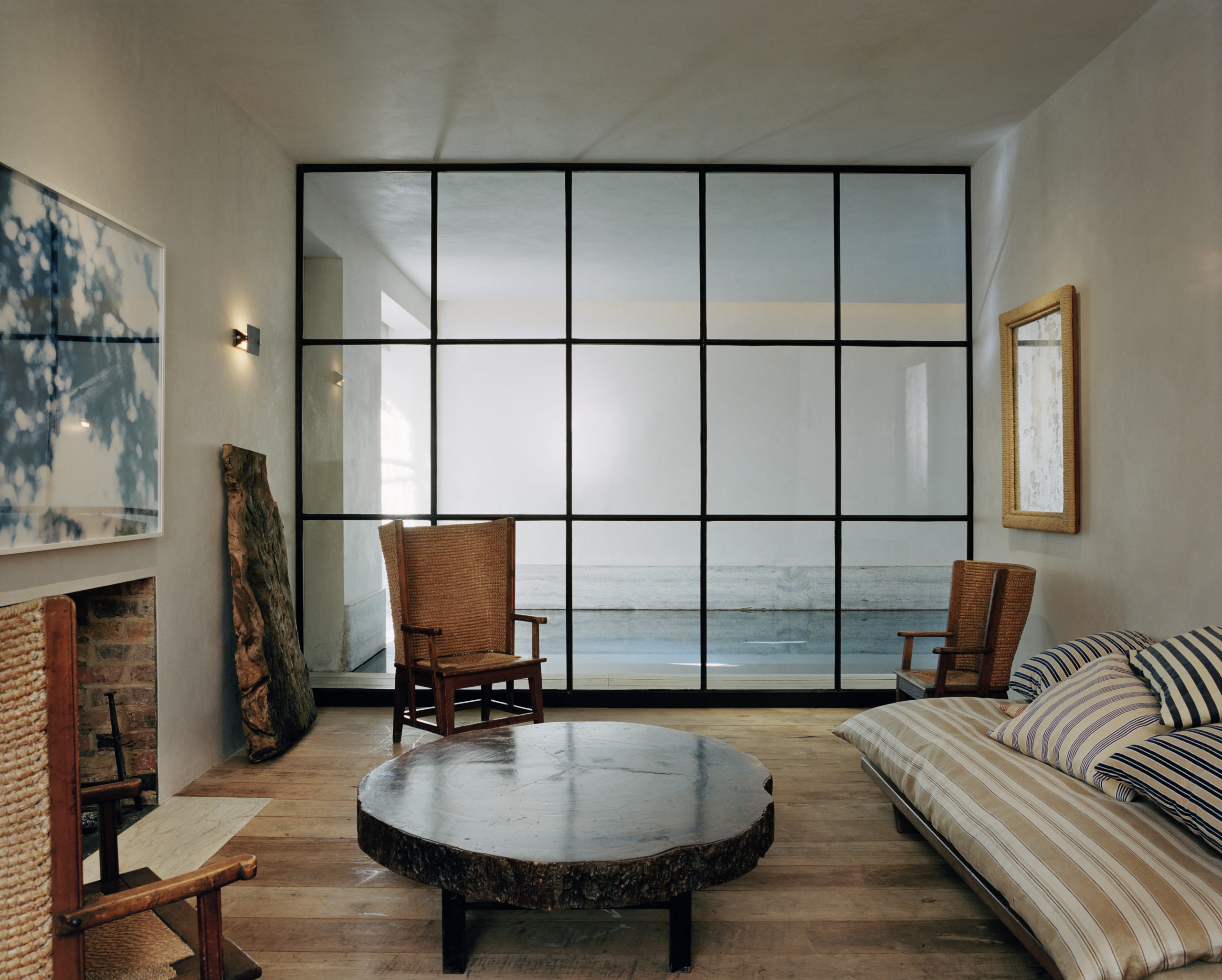 A sitting area by the indoor pool.François Halard

But as much as I wanted to highlight its architectural merits and its relation­ship with art, it was also important that the house was a home that could really be used, not just looked at. I have never been interested in the overly precious or self­consciously designed. I am interested in how life works in a space-the energy of it, and how it makes you feel. Is it adaptable? Can it stimulate, relax? Can you breathe, can you think? Can you do the things you want to do-does the space encourage you? I wasn’t interested in an art gallery or a museum of furniture that couldn’t be touched and enjoyed. But I also love elegance. I am alive to the challenge of how all these things can combine.

There are so many stories embedded in the bones of this building, and in the furniture and the art—our stories and those of others. I like to imagine them. What lives did these chairs and tables live before? What did these walls see? I can pass a piece of art and imagine the artist at work, the love and the struggle, just as Swinton and the students of the Grosvenor School loved and struggled here during the house’s beginning. All these stories, and ours, breathe an atmosphere into the rooms.

ADAPTED FROM ROSE UNIACKE AT HOME