We promise you won't want to leave. 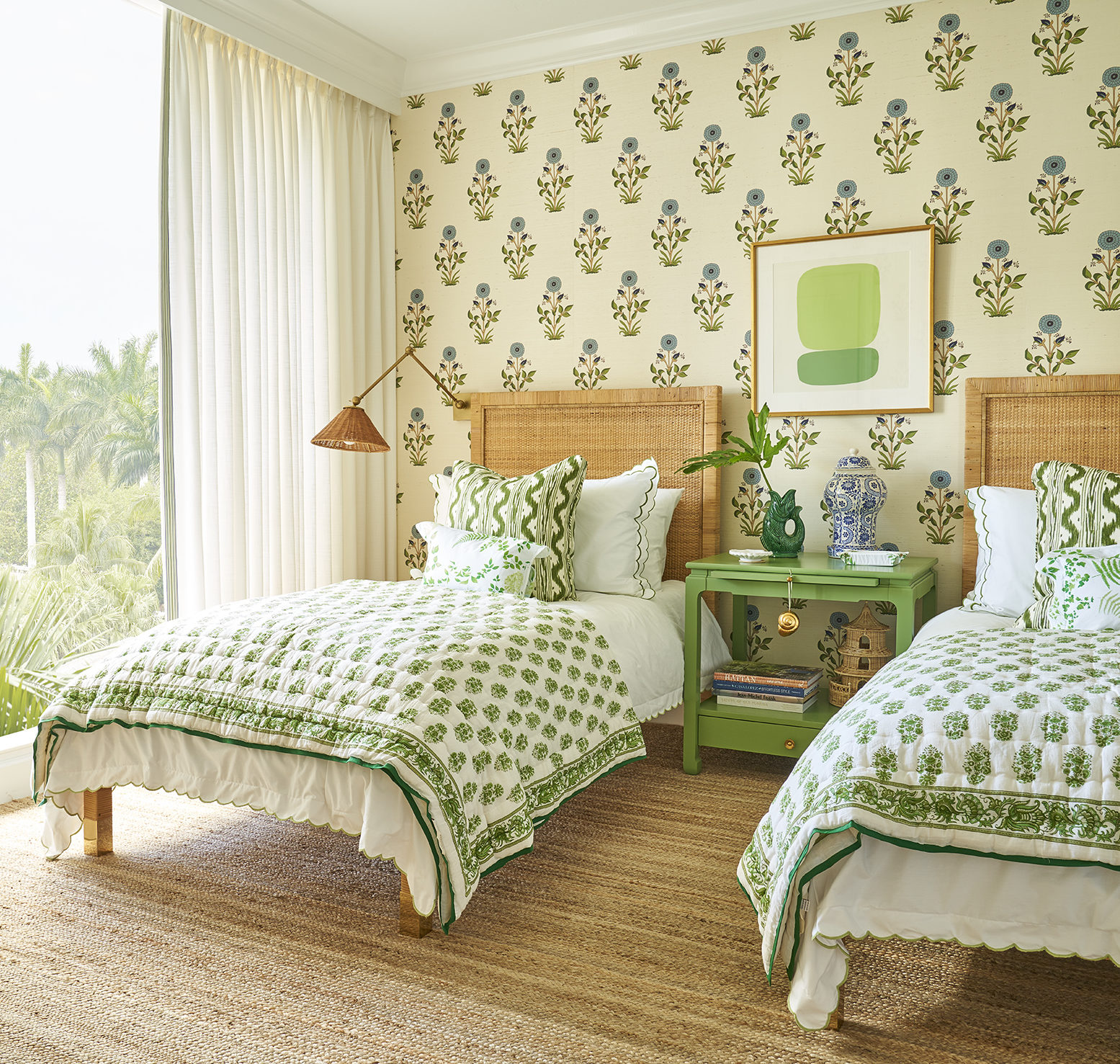 “When you do the unlacquered brass, it looks just more elegant and Old World and it just has that patina that’s so beautiful—it doesn’t look too ‘80s brass,’” Johnstone says of the outdoor lanterns she hung in this interior sitting area flanking a plaster, palm-fronted mirror.Kevin Kerr

Designer Shelley Johnstone’s pied-à-terre in Naples, Florida, is a bit like an oyster: “meh” on the outside, but nothing less than pearlescent within. “Because we’re right on the Gulf, we have hurricane shutters and windows that are a certain grade, because obviously you have to,” she says. Inside, “We totally gutted it! It had been done maybe 20 years ago, and the people kept it immaculate, but it just wasn’t our style—the condo had no architectural detail.”

Still, she and her husband bought the three-bedroom, 2,500- square-foot pad—in the same building where her parents also have a place—sight unseen. “We knew we wanted really pretty Gulf views, and not much comes up for sale,” says the Lake Forest, Illinois-based designer. “My father said he thought they might be considering selling this one, so my husband called them and just did it!”

Then Johnstone rolled up her caftan sleeves and got to work, transforming the abode into a veritable Vacationland. Her fixes amount to a type of architectural wizardry: new crown moldings in the gleaming white of a megayacht bobbing on the water; painted grasscloth walls for depth, warmth and texture; and plenty of those little touches that add up become very big moments, including square back plates on door knobs and “unlacquered brass hardware on everything,” Johnstone says. “I love everything really fresh and new looking, but also like it to feel like things have been there.” A framed photograph by Lorie Victor Kay adds another ocean view to Johnstone’s living room, where the designer paired a vintage rattan coffee table with an L-shaped sofa upholstered in heavy woven linen and a tasseled fringe with throw pillows by Raoul Textiles. “Vintage shell chairs are my signature,” Johnstone says. “I lacquered these white and then I usually put some fun prints on the seat.” Another trademark for the designer: shiny white woodwork. “When people paint the walls the same color as the molding, I can’t stand that because you don’t then see the difference. If I do a linen white wall, I always do really white, white, white woodwork.” The palm tree taper candlesticks are by CB2 and the abaca rug is by Patterson Flynn Martin. Kevin Kerr

The designer found her muse for her chosen interior color palette in the postcard-ready views outside her windows. “When you look out the window and you see the tops of the palm trees and then the Gulf beyond, those are the hues I brought in—those greens and blues that are really pretty,” she says. “The outside influence is always really important to me.” Jute carpet adds a sandy touch underfoot that brings it all down to earth. “It’s a lot softer than sisal on your feet, and it’s really flat, so it’s easy to walk on and you can put another rug over it,” she says.

This being a de facto beach house—albeit perched on the fifth floor—meant that easy, breezy fabrics were a must. “When you sit, a lot of times you’re in shorts or you’re in your bathing suit, so everything is really comfy fabrics to sit on and just enjoy,” Johnstone says. “We did a lot of indoor/outdoor fabrics, block-print linens and cottons, and a lot of ticking stripe.” In the main bedroom, Johnstone designed the headboard with an undulating silhouette to echo the waves on the water—and no bed skirt. “I didn’t want any dust ruffles and fussiness—I wanted everything lower maintenance because we’re making up beds a lot!”Kevin Kerr

Now, the hideaway is the perfect respite for her family, including their five children and a daughter-in-law. “It’s a little tiny space filled with all of my favorite things,” Johnstone says. But the best part is unequivocally the panorama from their roost. “We look over the beach club and the Gulf, so it’s really fun; we get the most gorgeous sunsets out our window, which are just magical,” Johnstone says. “People say, ‘Oh, walk over to the beach.’ And half the time I’m like, ‘I’m just going to watch it right from my own place.’”