Dive into the deep. Painting a room black or brown might sound a bit bold, but fear not: When skillfully used, these hues are anything but uninviting—in fact, both can be an easy way to add warmth and depth to spaces large and small. Don’t believe us? We asked top decorators for their picks for everything from painting staircase spindles a midnight black or bathing an entire library in rich cocoa. “It is ever-changing depending on the room’s light. It can read as a nutty brown with hints of gray or chocolate mousse, depending on sunlight—and one’s appetite!” – Philip Gorrivan “I love this color so much I washed an entire home in it—inside and out. It’s the perfect backdrop for artwork and furnishings, and never feels muted or cold. In this bedroom, it provided a deep, warm setting that beautifully showcased all the varying wood tones found in the antiques. It makes a strong statement without being the statement.” – Sean Anderson Walls painted in Down Pipe by Farrow & Ball contrasts a glossy white table in this breakfast nook designed by Heidi Caillier.Haris Kenjar

“I love this color because it has so much depth and richness. Depending on the time of day and season, it can read as black, blue, dark green or grey. I think people mistakenly assume that dark rooms will feel small or that you should paint every room that has a beautiful view white. In fact, black does the opposite—it draws your eye out and allows it to relax. It feels enveloping but expansive.” – Heidi Caillier “Dark, moody chocolate walls are always a favorite.  The color is truly a staple for added depth to a dramatic yet inviting room.” – Woodson & Rummerfield “It appears to be black, but it is actually slightly faded lending the room a softer edge. While I typically lean toward bright, light-filled interiors, I think every home needs that one dark room to escape to, and this neutral black wraps you like a blanket.” – Thomas Pheasant 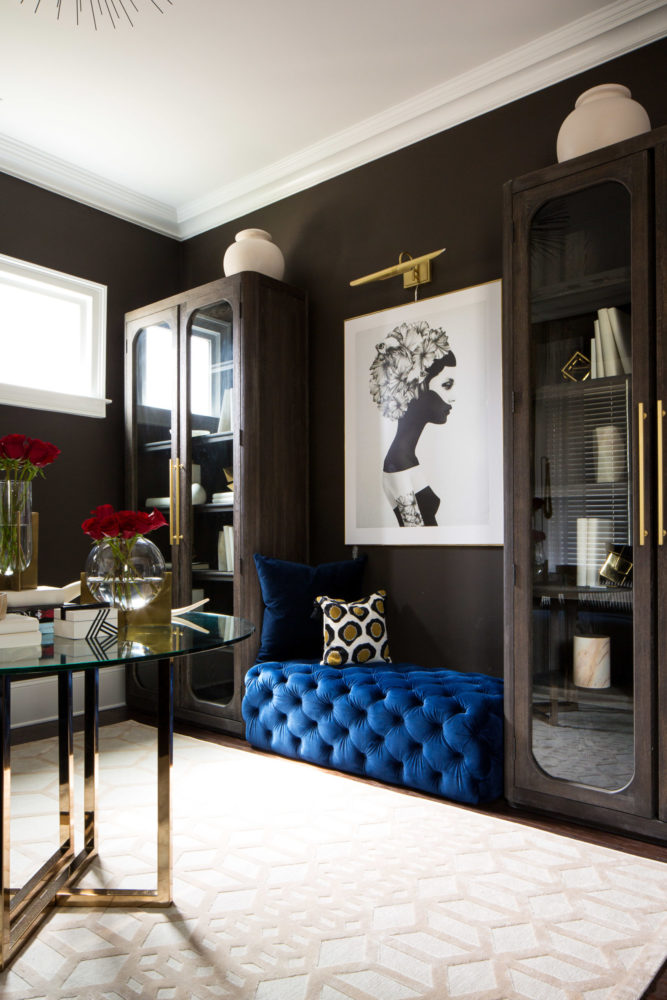 Using Sherwin Williams’ velvety Black Fox as a backdrop, the art and striking blue bench come to the forefront of this room designed by Forbes Masters.Kimberly Murray Photography

“We love this minky-brown color with its perfect blend of browns, grays and a hint of black. It’s very cozy and, when paired with natural materials, doesn’t appear overly dark.” – Forbes + Masters “It’s moody with depth and perfect for any library lounge. The black is such a sophisticated, classic, artsy, relaxing color for rooms.” – Melanie Turner “Darjeeling is a rich, moody color that pulls you in and makes you want to linger. That’s what I love about darker colors—there’s just so much depth to them.” – Gail Davis