Step Inside This Trad-Yet-Airy Connecticut Home By Barrie Benson

Barrie Benson conjures a fresh take on traditional for a vibrant young family in Connecticut. “Traditional” is one of those decorating words that that comes with baggage. Not only is it often shorthand for the kind of trappings that can literally feel heavy—antique brown furniture and velvets dripping tassels and fringe—it can also be a byword for interiors that feel expected. Few people hear “traditional” and think they’ll be surprised. Or inspired. Or charmed. 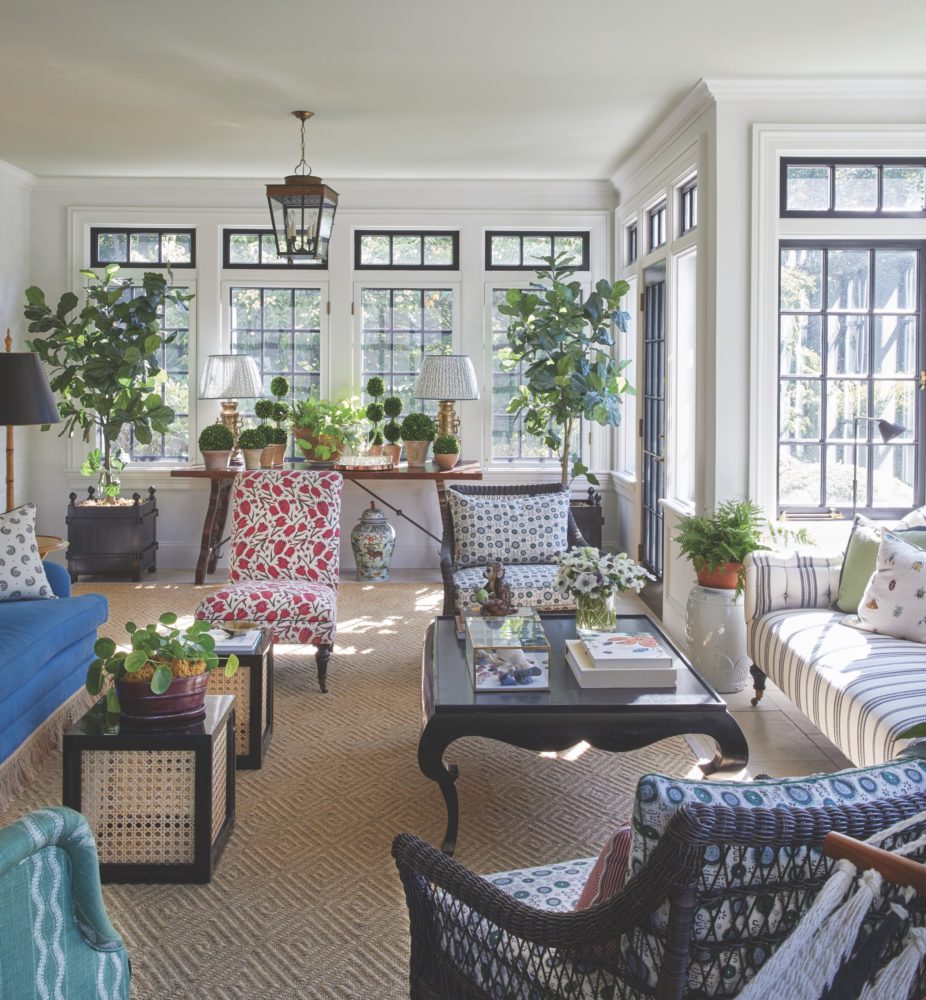 Benson warmed up travertine floors with grasscloth in a simple geometric pattern that served as a neutral canvas for a mix and match combination of textiles. The antique trestle table adds a sense of history: “You need something old in every room or it will start to feel like a showroom.”Francesco Lagnese 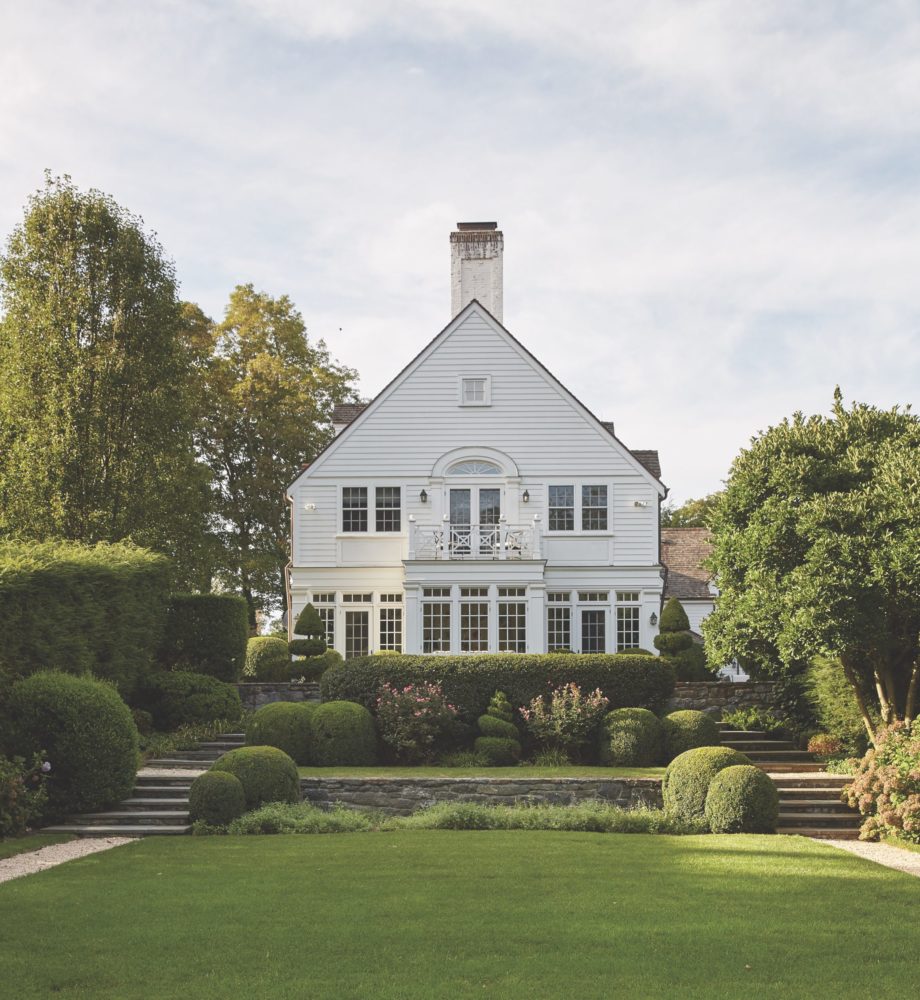 The house was built in the 1920s.Francesco Lagnese

“The wife is drawn to a traditional New England style,” says Benson. “But her family is young, she collects contemporary art, and she didn’t want the interiors to feel too heavy or too cloying. The challenge was to make this old setting youthful and sophisticated.” Benson channeled an old-world approach that synched well with her clients. The family had spent 10 years in London around that seductive English aesthetic, where interiors bear a boatload of worldly influences—centuries-spanning antiques, textiles that run the gamut from Indian paisleys to blowsy florals— and appear fabulously tossed off. For the bar, she riffed on English clubs like 5 Hertford, the boho-chic London boîte designed by former fashion designer Rifat Özbek, which the client cited as inspiration.Francesco Lagnese

Cue the furniture, a mix of hand-me-downs, vintage pieces, and custom upholstery that fit right in. “Even if they have warts I want heirlooms and family pieces with meaning in the house,” says Benson. In the kitchen, a contemporary white lacquer table sidles up to classic Josef Hoffman armchairs; new wicker in the sunroom mingles with an antique trestle table and a cerulean blue sofa edged in golden tassel trim. Once the boundary-blurring furniture plan was set, Benson dropped in fabrics with an eye to an eclectic, been-here-forever vibe. “None of them have a sheen and most of them are a little imperfect, with a nod to history.” Bring on the paisley and arabesque motifs reminiscent of 18th-century indiennes, hazy ikat stripes, and small-scale prints that toe the line between charming and refined. “Faded colors and finishes make it all feel casual and livable.” In the dining room, Benson chose a graphic abstract mural wallpaper in misty green- and grey-blues, “for a hit of glamour.”Francesco Lagnese

Of course, the corollary to making something look livable is the requisite that you can actually live in it. With children aged 8, 10, and 15, the furnishings had to cosset like a cotton ball but endure like cast-iron. “The little boy is really rough and tumble,” says Benson. “I have a 15 and an 18-year-old and I knew those sofas in the living room were going to just get trashed if they weren’t tough-as-nails. For most of the living spaces I used performance fabrics and patterns with big repeats that you don’t have to worry about spilling on because they hide stains.” Walls and a headboard upholstered in a Peter Dunham stripe in the master bedroom don’t line up for a purposely imperfect effect; oxblood-colored bedside lamps and a paisley used for the curtains makes the scheme less feminine.Francesco Lagnese 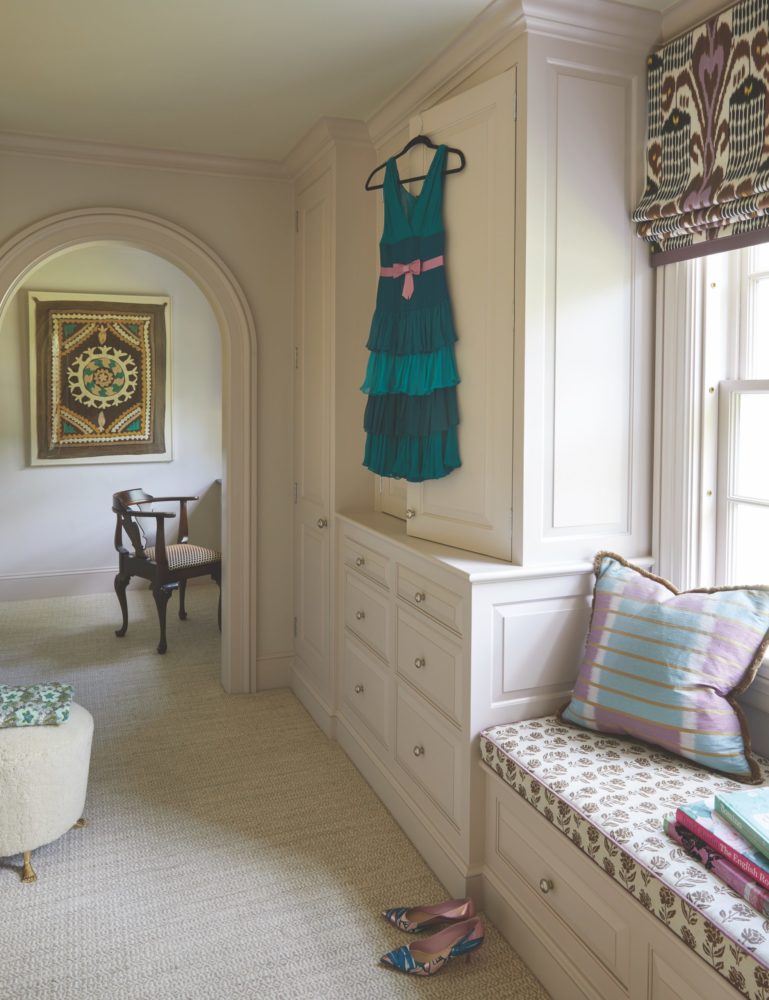 On paper, the living room is the kind of formal space you’d imagine in a house of this provenance, with sofas in a mossy green velvet, fabric covered walls, and straight-laced dentil moldings. In practice, however, the space is another animal entirely. There is an exhilaratingly graphic work by Clare Rojas hanging above the fireplace, armchairs covered in a large-scale botanical begging you to snuggle in, and fire engine red trim on the upholstered walls picking out the millwork like an exclamation point. “It makes the room graphic and ‘talks’ to the art,” Benson says.

Nowhere does Benson’s balancing act sing so well as it does in the sun room, a sundrenched space overlooking the garden that might be the most popular place in the house. Black painted mullions on otherwise bare windows punctuate traditional elements like a tufted roll arm sofa in a crisp ticking stripe and cane-sided cocktail tables. Indian-inspired fabrics loosen the mood as does a hammock suspended in a window nook—a tongue-in- cheek touch that’s also a serious perch for chillaxing. “Designers are constantly trying to imagine what kind of respite a room is going to be for somebody: for reading a book, having lunch, as an escape hatch for the kids to get away from their parents and maybe do some homework. With the pandemic, everyone wants to use all their rooms. When you sit in there with all those windows you can feel like you’re outside no matter what time of year.” Traditional never had it so good. In the sunroom, bare windows and muntins painted black give a sharp, modern edge to a mix of antique and vintage furniture; the tole lantern accentuates the indoor-outdoor vibe.Francesco Lagnese A hammock shakes up expectations with a sense of whimsy.Francesco Lagnese