Our Ode to Charles Sevigny, the Maestro of Blending the Modern with the Classic

By Meeghan Truelove
One of Sevigny’s goals with the interiors at Le Moulin des Corbeaux was to debunk the notion of modern pieces being sterile and cold. In the dining room, a Platner table and chairs sat beneath a Dutch chandelier that Sevigny and Vidal had silvered. The sculpture to the right of the windows is by Harry Bertoia.Courtesy of Thomas Michael Gunther 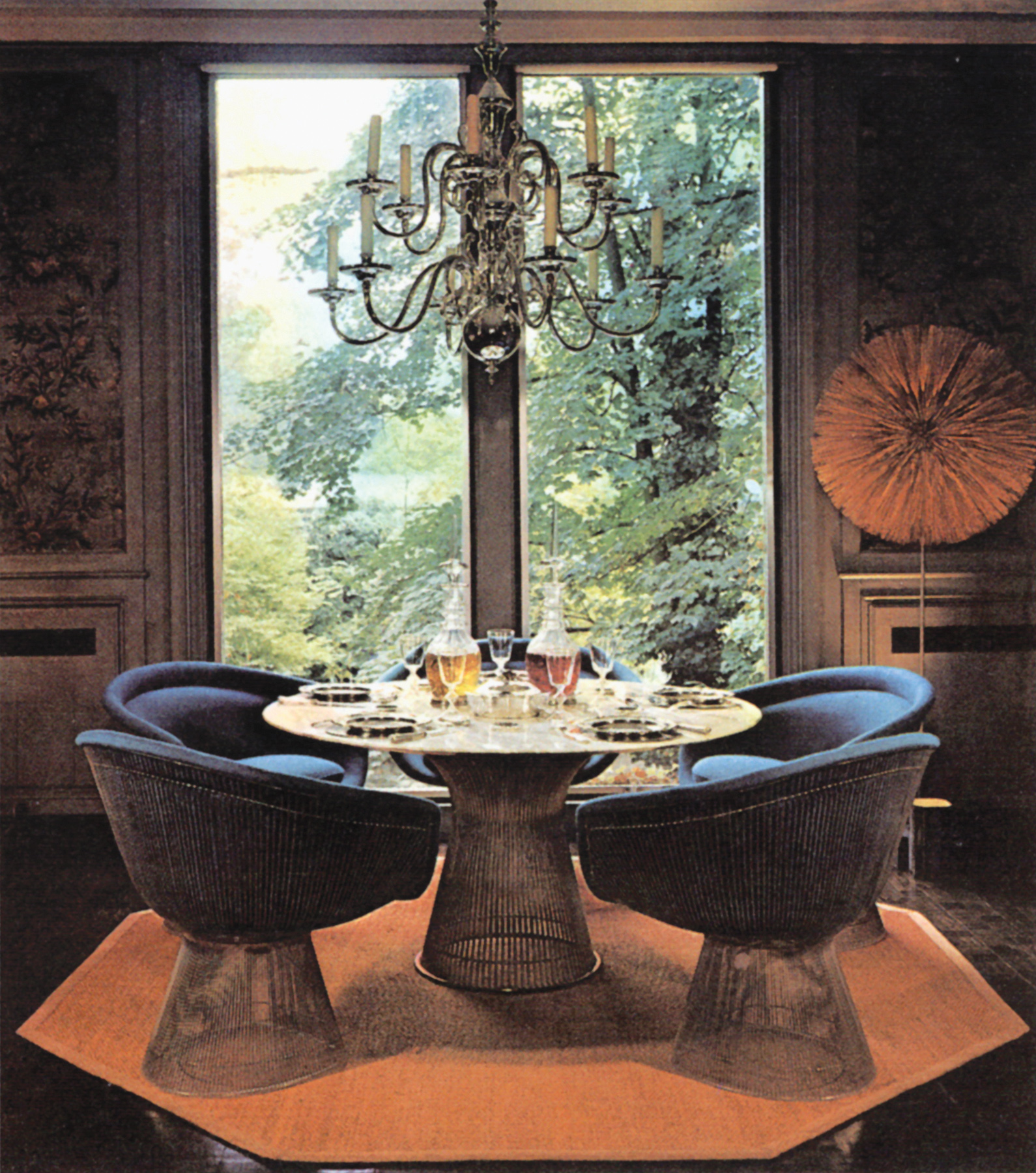 One of Sevigny’s goals with the interiors at Le Moulin des Corbeaux was to debunk the notion of modern pieces being sterile and cold. In the dining room, a Platner table and chairs sat beneath a Dutch chandelier that Sevigny and Vidal had silvered. The sculpture to the right of the windows is by Harry Bertoia.Courtesy of Thomas Michael Gunther
By Meeghan Truelove
Design

Charles Sevigny may have done more than any other interior designer of the 20th century to influence the tastes of the tastemakers. His affiliation with a certain juggernaut named Knoll and his transcendent body of work ignited an international design revolution.

Sevigny at his drafting table.Jacques Primois/ Courtesy of Condé Nast

When Hubert de Givenchy acquired his first major antique—a spectacular 17th-century armoire—he fretted about how to recast his Rue Fabert apartment to showcase the piece without having to go the à-la-Louis-XIV route. “My next move,” he later said, “was to call Charles Sevigny.”

Charles Sevigny conceived the private quarters of the Empress of Iran, collaborated with Ricardo Legorreta on Mexico City’s iconic Hotel Camino Real, created shut-away-from-public-view spaces for Paul and Bunny Mellon. And when Billy Baldwin needed just-right tables and peerless lighting for La Fiorentina, whom did he call? Charles Sevigny.

Sevigny installed giant, double-height windows at Le Moulin des Corbeaux, and kept them curtainless. “I’m a bit anti-fabric,” he explained. The effect was of being in the most marvelous treehouse.Courtesy of Thomas Michael Gunther

Born in 1918 and raised in Massachusetts, Sevigny served in Europe during World War II. Once back home, he used the GI Bill to study interior architecture under Van Day Truex at Parsons, where he landed a grant funded by Elsie de Wolfe that helped him light out for Paris in 1948. He never looked back.

A thirteen-year stint rehabbing war-ravaged American embassies for the State Department initiated the pollination of his approach across the beau-monde set (Deeda Blair, a client during her husband’s tenure as a U.S. ambassador, became an ardent fan). And in 1950, Florence Knoll enlisted Sevigny to help establish the first Knoll outpost in Europe.

Knoll was an unqualified success on its home turf in America, but how to tap the Continental market, where people cherished their inherited things and rarely bought new furniture? The tack was to demonstrate how Knoll’s goods, too, were things of exceptional craftsmanship and beauty. Set on Paris’s Left Bank and arranged as experiential, residential spaces, the boutique was a radical departure from the showrooms of its day and caused an immediate sensation when it opened.

There was no playbook for blending traditional decorating with bold new forms. Sevigny pioneered this aesthetic with his intuitive sense for a certain voluptuous spareness, and his rejection of the idea that design should stay faithful to just one style. His rooms were both generous and meticulous. They were wide-ranging combinations of materials, periods, shapes and provenance that felt at once startlingly original and effortlessly organic.

Perhaps the best expression of this was in Sevigny’s own homes, which he shared with Yves Vidal, president of Knoll International for twenty years. And what homes they were. At Le Moulin des Corbeaux, a converted 1480s mill on a tiny island just outside Paris, an 18th-century Aubusson tapestry hung behind chrome-and-wicker Marcel Breuer chairs. At York Castle, a crenellated 16th-century fort on a cliff in Tangier, a Saarinen Tulip table was framed by Moorish arches and set beneath an enormous Moroccan lantern.

In an image from a 1973 Architectural Digest story, the grand salon of Charles Sevigny and Yves Vidal’s 15th-century home, Le Moulin des Corbeaux, was arranged into four distinct seating areas. Antique parquet floors and 18th-century oak-paneled walls were juxtaposed with cocomats, chairs by Mies van der Rohe and Warren Platner, and an improbable towering cactus. One of the distinguishing traits of the three-story home was that it had no corridors, so there were no unused pass-through spaces.Jacques Primois/ Courtesy of Condé Nast

In the main bedroom at Le Moulin des Corbeaux, the suede-draped bed was set directly on the floor. The antique lapis lazuli mantel came from a Roman palazzo. Sevigny and Vidal’s homes were exquisite but decidedly unprecious. Sevigny, a life-long lover and owner of whippets, told The Chicago Tribune, “I have no patience with people who tell me dogs have dirty paws and they chew things. Such people have what I call clinical houses, and who wants to live in a clinic?”Jacques Primois/ Courtesy of Condé Nast

Both homes were featured prominently in magazines and brochures, but they were also robustly lived in, the joint epicenters of Sevigny’s and Vidal’s busy, social lives. They underscored the couple’s shared conviction that history is ever-evolving, to be respected but also engaged. Introducing new things and ideas to the mise-en-scène wasn’t a threat to what had come before, but a recontextualizing and fresh celebration of it.

Sevigny and Vidal’s other, much smaller but no less fascinating residence in Tangier, Dar Zero, is where 17th-century diarist Samuel Pepys is alleged to have stayed while in town, and in more recent years it has hosted everyone from Cecil Beaton to Hamish Bowles. In 2018, it was the backdrop for Sevigny’s glittering 100th birthday bash, thrown by Dar Zero’s current owners, Jamie Creel and Marco Scarani, and attended by a who’s who of design cognoscenti such as Madison Cox, François Catroux and Jean-Louis Deniot. Sevigny passed away in 2019. Vive le maître. An Inside Look at the Glamorous, 1970s-Inspired Sets of ‘Halston’

These Designers Make the Case for a Boldly Painted Staircase These Outdoor Dining Ideas Take Al Fresco to the Next Level