Stephen Sills Opens the Gates to His Secret Garden

By Margot Guralnick
An old white pine shades the terrace behind the main house. Sills picked up the 19th-century French garden chairs at the Pierre Bergé estate sale two years ago. Francesco Lagnese 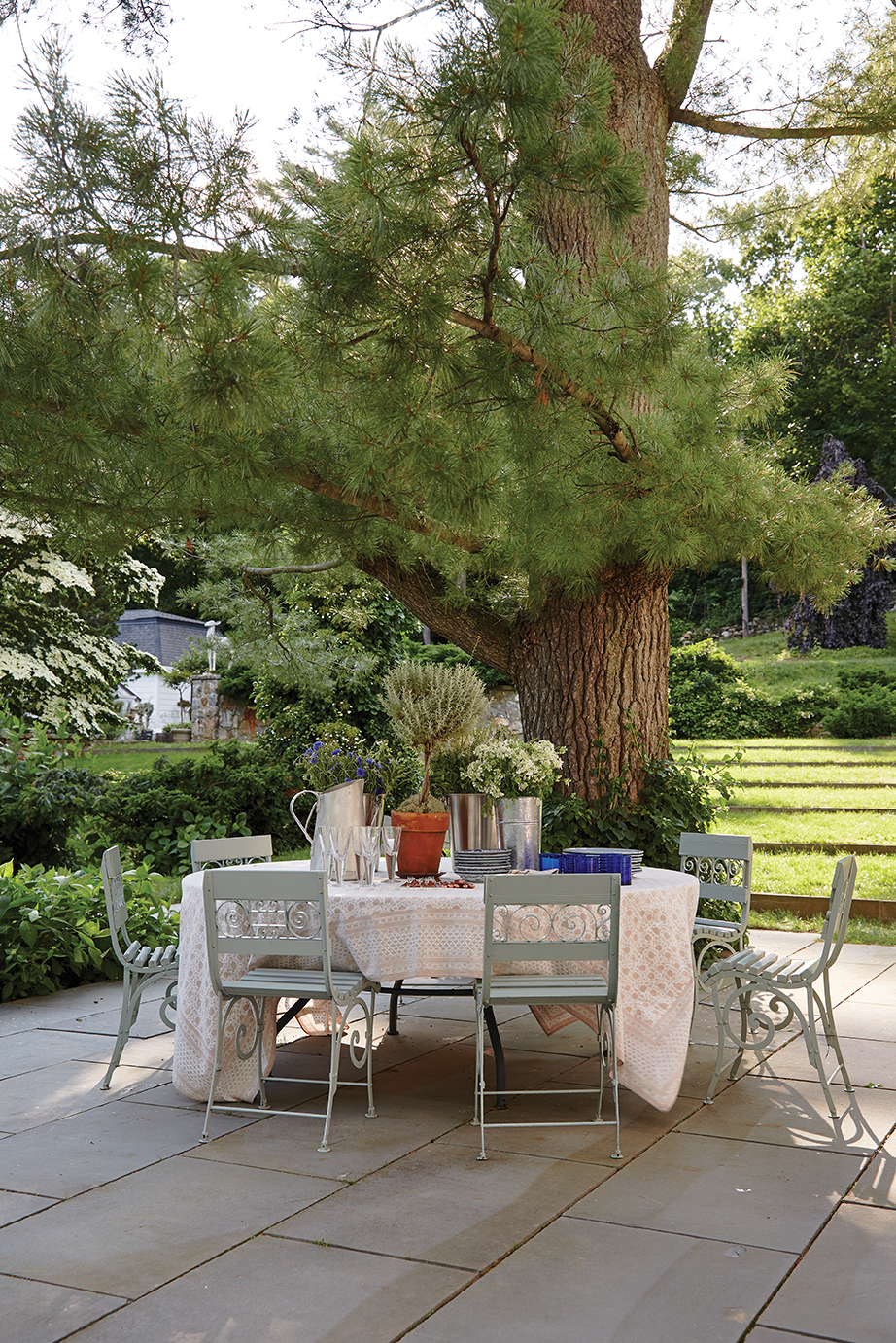 Known for his exquisite work for the most discerning clientele, the designer Stephen Sills has an extraordinary weekend retreat all his own in New York’s Westchester county. But what’s the fun of a country place if it can’t be shared? Integral to the property are its beyond-chic guest house and splendid garden, which Sills has nurtured as his haven for almost twenty years. 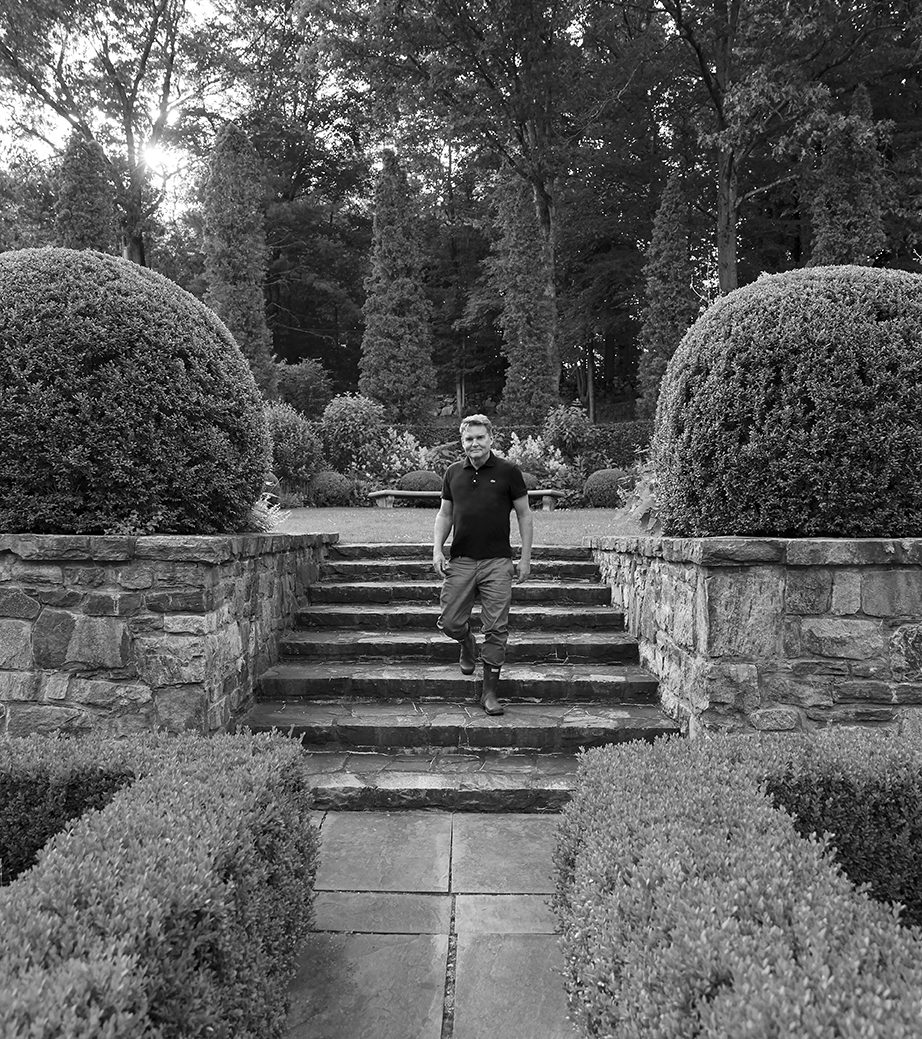 Sills in his element, walking from the upper garden to the parterre. For him, gardening is akin to decoration. “I build rooms and spaces and fit them together,” he says. He introduced just about all the stonework that gives the sloping landscape its definition.Francesco Lagnese

The day I visited Stephen Sills at High and Low, his country seat in Bedford, New York, just a little more than an hour north of Manhattan, his neighbor Martha Stewart dropped by to show off his place to a friend, and to remind him to stake his lemon trees.

Everyone wants to visit designer Stephen Sills at home. They have since 1991, when he and his former partner James Huniford, bought a rural estate in foreclosure and gave it an entirely new guise: an American palazzo.

The living area of the guest house, with a ceiling covered in painted canvas and a pair of 18th-century grotto tables that came out of Kew Gardens in London.Francesco Lagnese

A bedroom in the guest house is lacquered in a deep blue-grey and hung with antique Chinese prints. Sills designed the bedside table after being inspired by a Roman railing he spotted on TV.Francesco Lagnese

After tackling the 1920s Colonial main house—famously dubbed by Karl Lagerfeld “the chicest house in America”—Sills replaced a ramshackle garage with a two-story, 2,500-square-foot guest house. This refined cottage, with trellised walls and fanciful porthole windows, functions as a retreat within a retreat. Sills refers to it as his lab and studio, and continues to finesse every inch. The floor is paved in Canadian marble bricks whitewashed to look like cobblestone, the soft plaster walls curve at the corners, and the ceiling is a patchwork of painted pastel squares, Sills’ salute to Pauline de Rothschild’s multicolored tile floor at Château Mouton Rothschild in Bordeaux. The many guests who have camped out here include Tina Turner (a dear friend for whom Sills has designed two houses) and John Galliano (who, referring to the flooring, reportedly said it was “like sleeping on the most glamorous 18th-century French street”).

The archway at the end of the mown path leads to the pool.Francesco Lagnese

On summer weekends, while guests lounge in hooded outdoor chaises, you can find Sills weeding, trimming and deadheading. There are upper and lower “rooms” in the terraced garden, and much to behold: espaliered dwarf trees with white-painted trunks, brush cherry topiaries, a pond with a shooting fountain, a restored 19th-century greenhouse and a pool big enough for swimming laps.

The guest house has its own terrace and outdoor eating area. The porthole windows were inspired by David Hicks’s house in the South of France.Francesco Lagnese

The property originally belonged to Helen Morganthau Fox, a celebrated horticulturalist and writer, who planted the specimen trees—juniper, oak, elm and hickory—that serve as a privacy screen. Fox is the one who dubbed the place High and Low Farm, to “express my successes and failures, the hilly land, the high trees and the low herbs,” she wrote in her memoir, Adventure in My Garden.

Looking from the guest house to the main house across the parterre—planted with box hedges and lavender—which separates the two buildings. The topiaries are potted brush cherries and move to the greenhouse for the winter.Francesco Lagnese

Sills says he relates to the layered meaning, and likes to think Fox would approve of the garden’s evolution. An abundance of stonework, pleasingly patinated, gives shape to the green-on-green landscape. There are flowers, too—Siberian irises, lavender, snowdrift roses—but they’re not allowed to run amok. “Gardening for me is about creating structure and visual sculpture—it’s exterior decoration,” says Sills. As with his interiors, his gardens have classical European lines, and it’s not surprising to hear that he designs his plantings from the indoors out. Every window in both houses looks onto a composed garden still-life.

Astilbe in bloom along the garden’s perimeter.Francesco Lagnese

Sills wasn’t a practiced gardener when he arrived at High and Low, and has learned as he goes—by studying the great estates of Italy and France firsthand, and buying plants that catch his eye and seeing how they fair. He keeps his full-time gardener very busy. The 22-acre spread will never be done, nor would Sills ever want it to be—when he completes one part, it’s time to go back and build or start afresh on something else.

PRODUCED BY CAROLYN ENGLEFIELD This story appeared in the Spring 2020 issue of the Schumacher Bulletin. Click here to subscribe! Sarah Costello Transforms Her Daughter’s Bedroom Into a Grownup Retreat